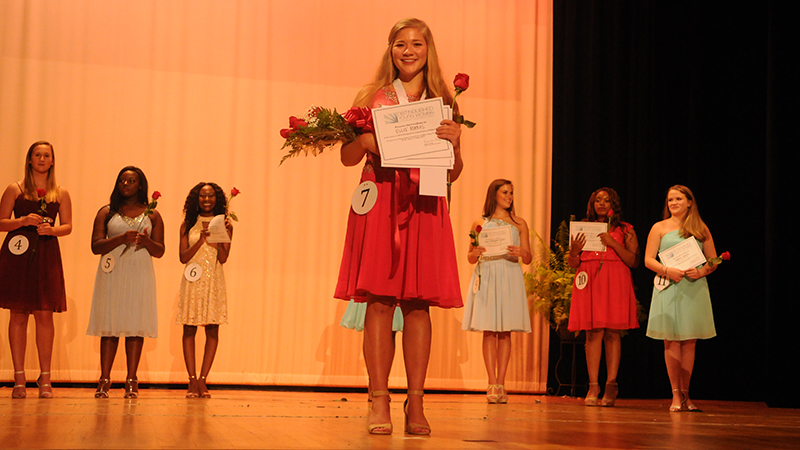 Elizabeth “Ellie” Adams, daughter of Bart and Stacey Adams was named the 2019 Distinguished Young Woman of Dallas County on Saturday night. Adams will represent Dallas County at the state competition.

A dozen talented young women from Dallas County put their best foot forward in showing off their talents, poise and self-expression, and on Saturday night at the Pickard auditorium Elizabeth “Elllie” Adams was named the 2019 Distinguished Young Woman of Dallas County. Her supporters cheered loudly for her as she accepted a bouquet of roses and lowered her head to receive the DYW medal.

“I felt all kinds of emotions,” Adams said. “I felt relief that I made it this far and made it through, but also excitement that I get to represent Dallas County at the state level.”

After a night of competing with the other talented young women, she was relieved that her hard work had paid off.

“We’ve all worked so hard, all these girls have,” Adams said. “It’s just such an honor to be Dallas County’s Distinguished Young Woman.”

The contestants were judged on their scholastics, interview skills, talent, fitness and self-expression. The young ladies worked hard to present their best to the judges.

“It’s a ton of hard work. I had support from my entire family. They were extremely supportive,” Adams said. “All the ladies of the Charity League did a great job in supporting us and providing us with the help that we needed to be able to perform tonight.”

Several other young ladies walked away with awards from the Distinguished Young Women. The first alternate was Jordan Harrison, daughter of Tim and Kathy Harrison. The second alternate was Mariah Davis, daughter of Joshua and Tromesa Davis.

The Spirit award, which was determined by the 12 participants, went to Madison Allen, daughter of Lisa Bonds and Henry Allen.

The winner of the Be Your Best Self essay contest was Adams.

Beers, Adams and Harrison won in self-expression. Adams, Harrison and Lakira Fails, daughter of Lovell and Carolyn Fails, won in scholastics. Davis, Harrison and Adams won in the interview portion.