Three first downs, a touchdown and two-point conversion not enough against Macon East 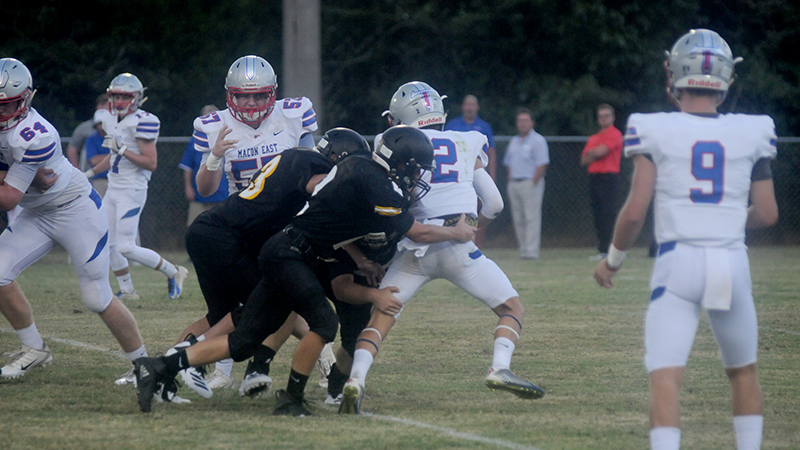 “We were improved from a week ago,” Meadowview Christian head football coach Bob Taylor said. “Macon East is a good AAA school. They’ve got great numbers, a great quarterback and they were a semi-final team last year that lost to Escambia. It was a good measure of where we need to get to.”

The AISA exhibition matchup was the first real test for Meadowview as the team returns to traditional 11-man football.

However, some things were consistent. The concession stand was open, the play-by-play announcer was in the press box and the cheerleaders kept up the team spirit for the Meadowview fans in the stands.

Macon East controlled the game from the start, and Jackson Ceman opened the scoring with a 45-yard touchdown run in the teams’ opening series.

The Trojans had difficulty stopping both the run and the pass. Meadowview allowed 265 rushing yards, five rushing touchdowns, 195 passing yards and three passing touchdowns. The Knights were six-for-eight on extra point attempts.

The Trojans did show flashes of good football, and caught Macon East off guard late in the second quarter.

“At one point, we had four freshmen on the field playing offense and defense,” Taylor said. “It’s going to take a while to build it back and do the things we need to do, but I saw some improvement.”

Trailing 33-0 with 3:44 left in the first half, the Meadowview made its first defensive stop in the game. A targeting penalty against the Knights turned the ball over on downs, and the Trojans had their best field position of the night on Macon Easts’ 37-yard line.

Meadowview Christian full back Alex Colquitt took the first carry of the drive for seven yards down to the Knights’ 30-yard line.

On the next play, quarterback Tayton Molyneux ran a perfect option play and pitched the ball to Cole Smith, who picked up six yards and the teams’ first first-down of the game.

The Meadowview fans were out of their seats and rooting loudly for their team as senior running back Zach Duke broke several tackles on his way to a 24-yard touchdown. Colquitt pounded his way into the end zone on the two-point conversion to put the cherry on the Trojans most successful drive of the night.

“[Colquitt] took some shots,” Taylor said. “If you run between the tackles at full back in the Wing-T, you better be tough. He did a good job of that.”

Colquitt ended his night with 49 rushing yards and the two-point conversion on offense. His tough running was the highlight of the Trojans offense, and he only had one rush for negative yards.

“It felt good to score,” Colquitt said. “It gave us momentum to keep on pushing.”

Despite his strong play, Colquitt left the game expecting more from himself and the team.

“I think we should learn to put more effort toward it and just push harder every single play,” he said. “Give it 110 percent every time.”

The loss was a teaching moment for the young Meadowview team, but now the preseason is over. The Trojans host Russell Christian Academy next Friday, Aug. 24 at Wasden Field for the season opener.