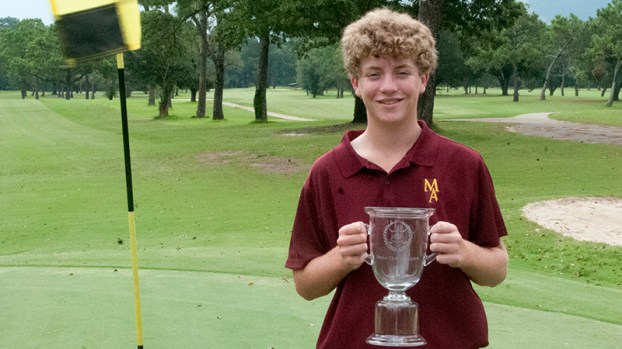 Two things to remember when playing tournament golf are to never give up, and always listen to your little sister when it comes to a make or break putt to win a championship.

Jones Free did exactly that on his way to winning the Selma Country Club Championship, and in the process becoming the youngest player ever to win it.

“The greens were soft and really slow, so you could play pretty aggressive,” said Free, 15, who has been playing golf about as long as he’s known how to walk. “Coming into the tournament I was actually hitting it really well and knew I could win.”

Free was leading by two strokes coming into the final day after shooting a blistering 65, putting him two strokes ahead of former club champions Bob Frazer, and his dad, William, who won the tournament last year. The Frees were paired together on the final day, adding a little extra pressure.

“When I saw he was paired with me I said, ‘crap,’ because he usually doesn’t play well with me because he’s trying too hard,” William Free said. “He had a rough start, was three over after five holes, but he never lost his cool. In the past couple years, he’s realized there’s two different nines to a tournament round, and he’s gotten to where he knows he can come in strong.”

Jones seemed to be letting the pressure of the day get to him, and was three over par after five holes after double bogeying five after his ball plugged into the lip of a bunker.  He righted the ship, though, birding 10 and 12, and then saved bogey on 13 after hitting it out of bounds. After another birdie on 14, two pars, and a birdie on 17, Free came to the final hole knowing he needed a birdie to potentially win.

Word had spread that eventual second place finisher Thomas Morris was playing well, so Jones knew a birdie on the final hole was likely needed if he was going to hoist the trophy in the end. By that time, his little sister, Sarah Lloyd, had hopped in the cart to ride with him.

“I’m sure it calmed him down having her around,” William Free said. “They grew up playing together and he would tell her how to play so I guess it was her turn to give it back.”

After a really good tee shot, Jones had 142 to the pin, but blocked it short and right of the green.

“I really hit a terrible shot, honestly, and was kinda beside a sprinkler head,” Jones said. “I asked [Sarah Lloyd] if I should chip it or putt it, and she said I think you should putt it. So I grabbed my putter and it broke a lot and fell in. It was awesome. It felt great.”

The thirty-plus foot winding putt from off the green wound up sealing the one stroke victory for Free, who had to wait out Morris who was playing a few holes behind him.

“I don’t think anybody was surprised he won,” Burns said. “The common theme among people is how far he hits it. He just bombs it off the tee. He’s like [Brooks] Koepka who just won the PGA Championship. They said when he was 12-years-old he could beat the world.

“I don’t know where Jones will go to college, but he’s good enough to play as a freshman and for anybody in the South Eastern Conference, or anywhere else for that matter. He’s got good academics, good citizenship and good character. I know he wants to play the [PGA] tour and it won’t surprise me a bit if he does.”

William Free said having his son dethrone him as club champion is special and something he’ll cherish forever, even if he does have to listen to it for the next year.

“I was very proud of the way he handled himself and fought back to win,” William said. “Even if I have to hear about it all year.”