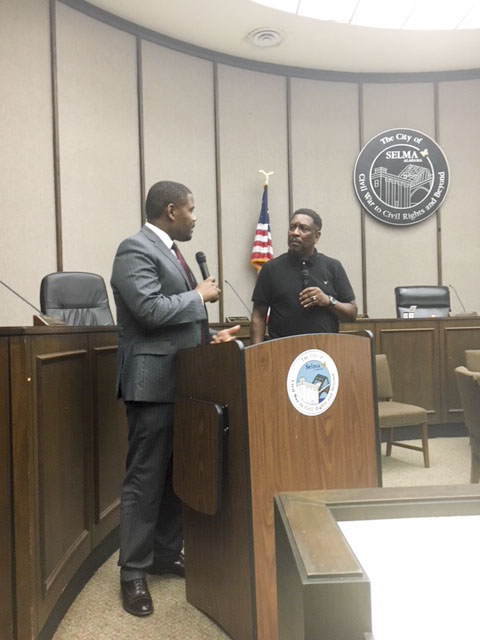 Stephens spoke about needs for the Fire Department, which included new software, Air Tanks, ATV, pay increase for officers and turnout gear. The cost for those items are over $100,000.

Melton believes Stephens’ department should get the equipment.

“The fire chief wants a system in place,” Melton said. “We can’t have our firemen second-guessing themselves.”

Melton stayed on the financial topic, urging the city council to consider his proposed $22 million budget. He delivered the budget to them on Aug. 3.

“The department heads talk to me about the budget,” Melton said. “It’s not about what I need, it’s what they need. It’s not a wish list, it’s a needs list.  As Mayor, it’s about being a leader and giving them what they need.”

Sen. Sanders and Rose Sanders both discussed Rose’s arrest on July 16. She was charged with fourth-degree theft and attempting to elude police after she was allegedly found taking probate judge candidate signs off private property.

Rose Sanders urged Melton and city council to adopt a policy where a child under the age of 18 shouldn’t be left alone without supervision.

“I asked Detective McGuire to allow me to make a call to a family member to get my granddaughter,” Rose Sanders said. “I was shocked when he refused. He took my phone and would not allow me to call anyone. My granddaughter, Azali, age 11, was left crying on the street when I got arrested.”

Youngblood said she agreed with Rose Sanders on a policy for unattended minors should be implemented.

Johnson admits Selma is in a financial bind, but he remains optimistic. The fiscal year ends Sept. 30 and the new year begins Oct. 1.

“Selma isn’t what it used to be, but we’re doing the best with what we’ve got,” Johnson said.

The city council and Melton will have a budget hearing at 4 p.m. Tuesday in the Edmund Building.