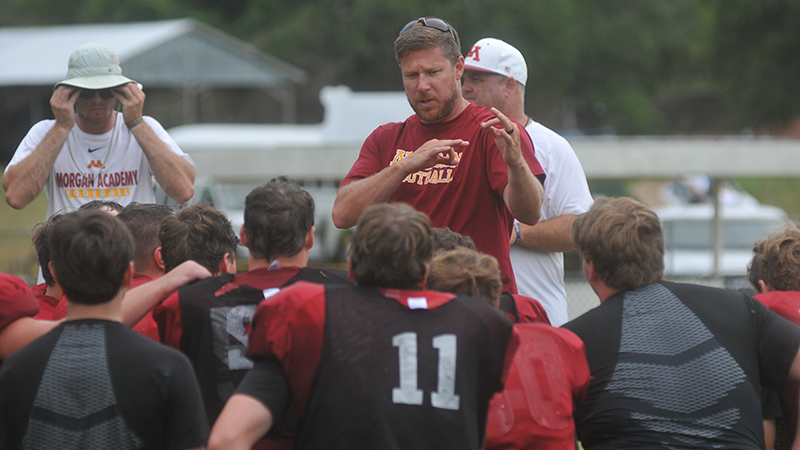 Football practice on Tuesday afternoon was a lot cooler than Monday’s 95-degree scorcher, but the weather still found a way to throw off the practice schedule.

The Dallas County Hornets were chased off the field by lightning and heavy rain shortly after they finished warming up.

Hornets head football coach Zeke Pigg tried to squeeze as much practice in as he could before the storm clouds came over the Hornets practice field. Not even midway through his first set of position drills, he had to blow his whistle to send his team back into the field house to wait out the storm.

The attempt to wait out the rain was wasting valuable practice time, so Pigg tried to move practice to the old gymnasium. Unfortunately, the team was unable to get in and they returned to the field house once again.

Frustrated with the inability to practice, Pigg found a way to make use of his time and took care of housekeeping items to help prepare his team. Pigg took care of some equipment needs for his players, since it was unlikely that they would be able to get back on the field Tuesday evening.

Back in Selma, Morgan Academy only had a brief lightning delay. Senators head coach Josh Thacker held his team for 15 minutes, but the team was back on the field once the storm passed and the rain stopped.

The Senators are already in helmets and shoulder pads since their first game is quickly approaching on Aug. 17 at Pike Liberal Arts.

“We’ve been preparing since May,” Thacker said. “This is just an extension of the game where we get to put pads on and work on some more techniques and fundamentals. The past two weeks have been good to us.”

Thacker is pushing his team to compete in everything at every practice. To end Tuesday’s practice, he paired up his new quarterback Jeremy Lee against his leading receiver from last year Hardin Utsey.

“We compete every day in practice,” Utsey said. “We have a winner and a loser every day, but we want everyone to be winners. If everybody gives their full effort, then they are a winner.”

Most of the Senators lined up behind the 500-plus yard receiver with seven touchdowns, but a few players gathered behind Lee to support the new-comer.

Utsey won the 40-yard race, but Lee impressed by staying right on his primary target’s heels each step of the way.

The race closed out practice for the Senators, and the team broke down the group huddle after a prayer.

“Things have been going well,” Utsey said. “We had a good camp last week. Long camp, but it was good. Everybody grew on that and we got better each day. The line looked good and the skill players looked good.”

The Senators are working to build off a strong 2017 campaign where they reached the second round of the AISA state playoffs. The team is in good spirits and ready to take on the upcoming season.

“The team energy is pretty good,” Utsey said. “Some days are better than others, but most of the time we’re pretty fired up about coming to practice. Everybody’s looking forward to coming out here and having a good day.”