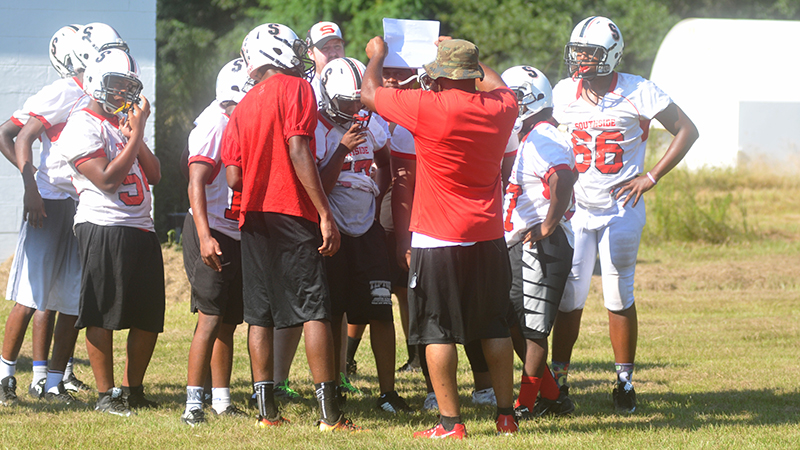 Southside High School’s assistant football coach Jay Fortune holds up the play for the offense during walk-through drills at the first practice of the season on Monday afternoon.

The return of the school year for Selma City Schools and Dallas County Schools also meant Monday afternoon was the first official day of football practice for the season.

The offseason has ended and the countdown to the first game of the year has begun.

“It’s like Christmas for me,” Southside head football coach Daniel Flowers said. “We get a chance to see the guys play football again… They’ve been able to do what they want to do all summer, and now they’re back in structure. I’ve got to get them back in the pace of playing football again.”

The players were in helmets only to start the week during the acclimation period. Flowers will not have his team in full pads until Thursday’s practice.

“It’s going well. We’re just trying to get used to the heat right now,” Raymond said. “But we put a lot of work in this summer, and the kids seem to be handling it just fine.”

The acclimation period is a no-contact stretch that allows the student-athletes to get used to the heat and ease their way back into football practice before putting the pads back on.

“Everybody is going through this 90-degree plus temperature, so we have to make sure the guys get water breaks and get a lot of them back acclimated to football… It’s not really about learning schemes right now, but getting back into football condition,” he said.

The Southside Panthers started Monday’s practice with special teams work before walking through plays on offense and defense. After the team period, the players split into individual position drills.

Getting back into action was exciting for Flowers, whose team finished 7-4 last year and made the playoffs. His starting quarterback, Malik Johnson, returns for his senior season to lead the team again.

The Panthers head coach is mostly looking forward to getting his whole team together since not many of them were able to make it to the voluntary workouts through the summer.

The Saints practice had action on each segment of its practice field.

“The first day brings new opportunities and new challenges,” Raymond said. “It’s an opportunity to get better and I’m just excited about Aug. 6.”

Saints 2017 first team all-county receiver Gabriel Wade was glad to be back on the field with his teammates on the first day of practice.

“I’m just glad to be back with my team,” he said. “Everybody is ready. We’re just trying to get one step ahead, one day at a time.”