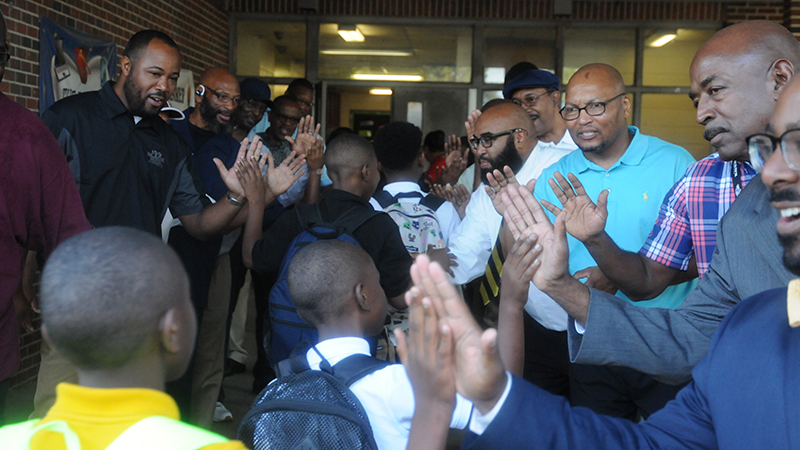 Students flooded into schools across Dallas County and Selma Schools on Monday as the first day of the new school year began.

At Craig Elementary School, the 100 Collegiate Black Men group met students at the door to wish them a good first day.

“This is the third year that members of the Selma 100 Black Men and other groups have met the school students at one of the schools,” said Charles Johnson, a member of the group. “The first year we were at Tipton-Durant Middle School and the second year we were at Selma High School.

“Our desire is to let kids come in and see a group of men that are concerned about helping them get off to a good day,” Johnson said. “The 100, which is led by Billy Young, is an organization and we have done a lot of stuff since we have been in an existence. The whole idea is that we ask various groups to join us at these greets, and I think we are expecting more than just us to come to participate.

“We meet once a week,” said Johnson. “This is a group of men of all ages, and it is a biracial group that started meeting about six years ago. We have anywhere between 18 to 20 people in attendance every Wednesday.

The group also has donated to organizations such as Teen Challenge and March of Dimes.

Meanwhile, Selma City School Superintendent was checking in on her new principals.

Williams spent time at R.B. Hudson Middle School, Edgewood Elementary, Kingston Elementary, Meadowview and Selma High School on Monday, all of which are under new administration.

Williams said she is optimistic about the new school year.