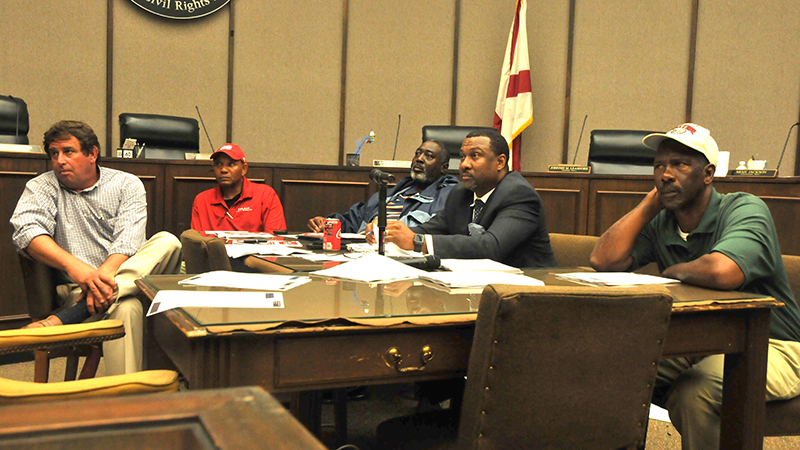 Selma City Councilman Carl Bowline hosted a Recreation Committee meeting Tuesday afternoon in the council chambers at City Hall to discuss the health and wellness of the city’s Parks and Recreation Department.

“[Parks and Recreation] is one of the few places that children from all over the community can come together and play sports,” Bowline said. “That’s why we’re all here. To me, that’s the most important thing at the end of the day… some people have praised the department and others have had issues with the department.”

The open meeting was lightly attended, but a few citizens and youth sports coaches were in the chambers to gain insight into the departments status.

Parks and Recreation director Sean VanDiver, Terry Jackson, Curtis Wimberly and Gerald Barron were all present to represent the department. Selma mayor Darrio Melton also attended the meeting and observed from the back of the room.

Even though personnel issues weren’t scheduled to be discussed, Van Diver did address a few incidents that were brought to the committee’s attention.

The Parks and Recreation department did place an employee on a five-day suspension for using a city lawnmower for personal use.

“It was a miscommunication,” VanDiver said. “An employee was given an off-work assignment to do, and he didn’t think it was a big deal for him to do it while he was on his lunch break.”

Opening the recreational baseball league was delayed due to the city of Selma and Dallas County not having a contract until March.

“The season could not start immediately because we were trying to schedule all the games on the complex side so we could move forward with the season because we did not have any signed deal that we actually had permission to play on the complex,” VanDiver said. “After that was done, a lot of people didn’t understand that we had a freak storm that came in the end of March and beginning of April where it froze and busted every pipe inside the complex and flooded it.”

The damage from the storm, plus the delays caused by rainouts took out at least three weeks of play, according to VanDiver.

Another issue was from complaints about the 8U Dixie Youth Baseball tournament championship. Parents and coaches at the game were upset and confused the night the 8U Selma All-Stars lost the championship game in the final inning, because they were under the impression that it was a double-elimination tournament.

“The parents were irate because they thought it was a double-elimination because they had beat everybody, but that is not what the coaches in the tournament agreed to,” VanDiver said. “We don’t set the rules when it comes to Dixie Baseball tournaments. Those rules are set by Dixie.”

Deborah Reeves-Howard, a citizen at the meeting, accused Barron of using city money to purchase a shirt, shoes and a duffle bag for his personal use.

The Recreation Committee stated that these were gifts, but since they cannot accept the gifts, Barron returned the items appropriately.

When asked about equal employment opportunity complaints against the department, the Recreation Committee had no comment.

“They are under investigation,” VanDiver said. “I can’t comment on that.”

“[Selma Parks and Recreation] actually took over the complex, so we get all of the money from the gate now,” VanDiver said. “In March or April, we asked the city council to do a contract where they actually lease it to us, so the funds that were going to the complex gate no longer went to the complex. It comes to the city of Selma.”

Under the consideration and administration section of the lease agreement between Dallas County and the city of Selma, the “City shall receive all gate fees for admission to the Premises for sports events, all revenue generated from temporary permits and licenses for the use of the areas by private parties, and all revenue from concessions (food and drink).”

Despite the bump in revenue, finances are still a primary concern for the department and the city of Selma.

“It’s a lot of robbing Peter to pay Paul,” VanDiver said to describe the financial situation that covers the costs of equipment, meals and travels for the multiple city teams and all-star teams. “The actual budget is only designed for tournaments for the pre-major teams for 18 and 19-year olds. Now, the city of Selma has expanded the amount of teams that travel.”

The 8U all-stars, two 10U all-star teams, the 12U, 14U, 15U and the 17U team traveled this past year, even though the funding only covers two teams. VanDiver stated that costs that were assigned to other sports like football were moved to supplement the costs of the baseball teams.

“As you can see, it’s an uphill battle and I don’t think the public understands what we have to do,” he said. “You can see the budget transfers we had to make to cover what it takes for the teams to actually travel.”

The city provides the uniforms, the vans, meals for the kids, hotels and registration fees for the teams, according to VanDiver. Items the $10 fee to play in the league doesn’t cover.

“We’ll have to make tough decisions moving forward on what are we going to actually fund, what expenses will have to be put back on the parents or what fees will have to be raised so we can afford to continue moving down the path that we’re on,” he said.

In addition to addressing the issues with the department, the committee also heard pitches for three semi-pro teams that want to get involved in the community.

Darren McGilberrry wasn’t present at the meeting, but VanDiver gave a brief introduction for his semi-pro baseball team, the Blackbelt Bombers, which provides former players an opportunity to continue playing baseball after high school.

The Recreation Committee did not set a date for its next meeting at the end of the session, which lasted just over an hour.