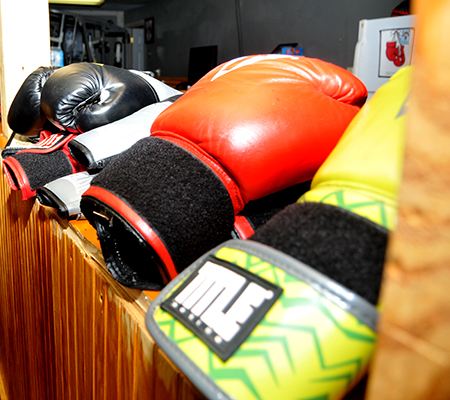 A pile of boxing gloves rest on a counter at the Selma Boxing Club.

The sound of the timer signals the first set of burnouts on the heavy bags for Landon Moore and Jacorbre Surles at the Selma Boxing Club on Friday afternoon.

The second alert reminds them that they still have another 30 seconds to go, but their arms are getting heavier as they continue to alternate jabs on their respective bags.

Yet Murphy continues to encourage them through the set.

The final sound releases Moore and Surles from their final set, and they back away from the heavy bags to catch their breath and recover.

“90 percent of boxing is being in unbelievable shape,” Murphy said. “People are used to football where you have plays that last a couple of seconds and then you catch your breath. In boxing, you’re looking at three minutes and there’s no breaks, no timeouts or nothing.”

The Selma Boxing Club is a full gym with speed bags, heavy bags, jump ropes, weights and a full-sized ring. The club and Murphy are registered with USA Boxing, and there is a pile of boxing gloves that haven’t seen much work recently.

“Everything that they need is here,” Murphy said. “I would say I have not been in a boxing gym in the state of Alabama with a better setup than what we have.”

The club, which used to be open five days a week, now only operates three afternoons a week. The club is a non-profit organization, but low attendance and unpaid fees have made it difficult for Murphy to operate the facility how he envisioned it to be.

The Selma Boxing Club was supposed to be a gym for those who wanted to get in shape, a resource for kids with little else to do or simply a gathering place where people could workout, shoot pool or socialize.

“I think it would be a huge asset for the community if it was used,” Murphy said. “Nobody seems to take advantage of it. At times, I feel like I’m taken advantage, so that’s kind of the frustrating part of it. I think it would be huge as far as getting the young people into something where they would be conditioned properly as far as fitness.”

Unfortunately, the club hasn’t gotten the attention Murphy hoped it would.

The club opened in November 2015, and three years later Murphy is facing a tough decision about its future.

It takes approximately $5,000 per year to operate, according to Murphy. The membership fees used to be $50 per month, but in an effort to entice more kids to join he began to allow them to work for their membership. When that proved to not be enough, the club has waived the fees and is just hoping kids, adults or anyone interested will utilize this community resource.

In addition to his day job as an environmental scientist, Murphy also breeds AKC Boston Terriers to help raise money to support the gym.

“If they have any puppies that I can turn out for adoption fees, then all that money comes to the club,” Murphy said. “But we haven’t had a litter all year, and I’m going to have to determine if I’m going to stroke a check at the end of this year [for the club].”

The opportunity to just have a place to go has been an excellent outlet for Surles. The 15-year-old student at Dallas County High School uses his time in the gym to help him stay out of trouble. 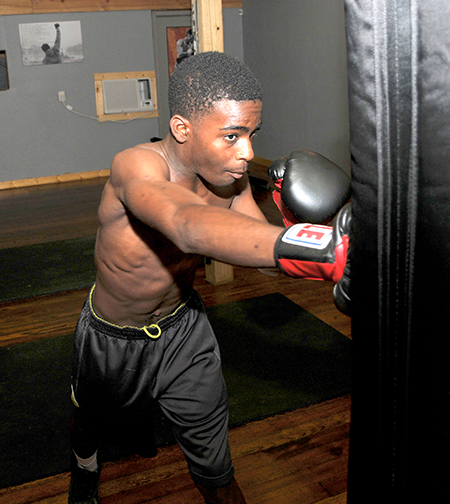 15-year-old Jacorbre Surles takes a jab at the heavy bag during his workout session.

“It’s summer time, and it’s easy to get in trouble,” he said. “Especially being a young, black male in this society. [Boxing] helps me take out my anger. I’ve got bad anger problems, so it helps with that a lot.”

Surles was in the Dallas County Detention Center program when he was first brought to the gym. According to Murphy, he was the only one to come back to the gym after being released from the program and has been coming to the workouts for two months.

Surles is self-aware of his anger problems and some of the triggers that come with it.

“All these people getting killed and all that stuff,” he said. “I lost a lot of my friends last year like Chris Lee. That triggers it a lot… And when I feel disrespected, that makes me angry too.”

But he found something he liked with coach Murphy and working out in the gym. It gave him something to do to work on his anger.

“I liked it and I just wanted to come back,” he said. “They told me that it would keep me out of trouble and I liked it. I like being able to let go. Up In here, you don’t have to worry about your problems. You let all that go and give it all you got.”

Jake Irby, a night shift supervisor for the center, believes that the program with the boxing club has been beneficial to the young men who have utilized it. The relationship with the club began this past March, and a few young men have taken to the lessons.

“It gives them the opportunity to use some of the energy that they have here with the exercise in the boxing ring,” Irby said. “If they do it the way they’re supposed to do it, then it’ll show them a lot of discipline, and let them know that hard work gets the job done.”

Murphy has had a positive impact on Surles, and has earned his respect through his training.

“It’s been working good,” Surles said. “I like coach Murphy and he’s a good trainer. He always pushes us, and there ain’t no giving up. Whether you like it or not, he’s going to push you.”

Moore, another one of Murphy’s trainees, also enjoys coming to the boxing club. 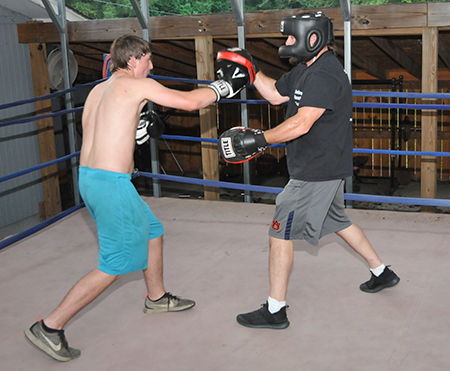 “It’s just that Murphy is a good, friendly person, and it’s a good spot if you don’t have anything to do,” Moore said. “Even if you don’t want to work out, but just hang out. It’s a fun spot to be around good people.

The club piqued Moore’s interest as he noticed people working out at the gym when he would pass by, and he decided to give it a shot.

“Murphy will give you opportunities after opportunities,” he said. “If you can come, then come because it’s a good place to be.”

Two other young men joined Moore and Surles later in the afternoon to begin their workout. Murphy put them through an intense round of conditioning exercises before he told the young men to go grab a pair of gloves.

Murphy’s dedication to the club is admirable. He maintains the gym the best he can, and puts on his protective gear when it is time to step into the ring.

Even after an accident soon after Thanksgiving, when one of his goats struck him in his right-eye with his horn, Murphy still gets in the ring.

“I was feeding the goats and it was just a freak accident,” he said. “He shot the horn up and it ran through my eye and knocked my retina loose, but the doctors up in Birmingham are amazing. I’ve got one more surgery coming up, so hopefully they’ll give me a good bit of my vision back.”

The players climb back up through the blue ropes onto the canvas, which is faded red after years of exposure to the elements. Only recently, did a donation allow Murphy to install a roof over the ring.

One-by-one, he takes them through mitt drills. He calls out the combination, and the kids pound the mitts with jabs and combinations.

Boxing is a tough sport, and the Selma Boxing Club is in its toughest bout. Murphy hopes that he can maintain the club, but it will be tough without more community support.