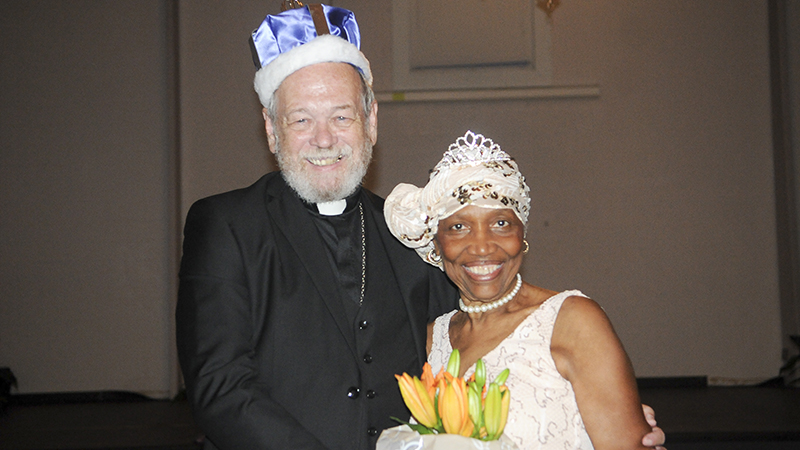 Memory Lane: Father Aaron Appleby and Evelyn Cox were crowned the 2018 King and Queen of the Senior Prom Friday night.

Senior Citizens enjoyed a trip down memory lane Friday night. The Selma City Council and Edmundite Missions hosted the third annual Senior Citizens Prom at the George P. Evans building. The theme for the event was “Over the Rainbow”, and the seniors came dressed in their finest prom attire.

As each guest came into the door they were greeted with a smile from the men of the Delta Pi Lambda chapter of Alpha Phi Alpha Fraternity, Inc. Each lady received a rose, courtesy of former Mayor George Evans.

The chapter’s president, Billy Young, said event organizer Councilman Sam Randolph reached out to him and told him about the Senior Citizens Prom.

“[Randolph] asked that the Black Belt Alphas come out and serve as ushers, so I sent it back to the chapter and the brothers showed up tonight,” Young said.  “We believe that the people that are here tonight are the backbone of our community and we are glad to be here.”

Randolph said the event met his expectations and more.

“It’s a great crowd, and it gives the senior citizens something to do in Selma,” he said. “We want people to let their hair down, have fun and don’t worry about anything. You got two hours to just do what you want. That’s what our goal is.”

The seniors enjoyed a spread prepared by Big Boy Barbeque. Dj John Solomon provided some “old school” tunes for the crowd as Mamie Solomon grabbed the mic and got the seniors up and dancing. After the fun, the seniors also got a chance to take a prom picture before they left.

“We’re gonna try to come up with more activities to let our senior citizens know ‘It’s OK to come out in Selma, and it’s OK to live a normal life,’” Randolph said.

He said without the constant support he has received the event would not have continued to go on.

“I’m grateful for all of the support I got from the Edmundite Missions, Guys and Girls Social Savings Club and Big Boy Barbeque,” he said. “Former Mayor Evans paid for all of the roses for the ladies and we are just ready to have a good time.”

Chad McEachern President and CEO of Edmundite Missions said the collaboration formed years ago after Randolph expressed a need for events catered towards seniors.

“I was on board from the beginning,” McEachern said. “We stand on mighty big shoulders, and to see them smile and dance and be youthful; there’s nothing better. It fulfills every part of our mission.”

According to McEachern, the Edmundite Missions organization believes in serving people their entire lives.

“In the missions, we believe in caring for people from the cradle to the grave,” McEachern said. “We care so much about our elderly, and that they live wholesome fruitful lives. It was wonderful when he came to us and wanted to partner.”

Evans said events like these are just what the older citizens in the community need.

“It’s a joy to let the seniors know that we haven’t forgotten them,” Evans said. “I just enjoy this and I’m glad to see so many people out tonight.”