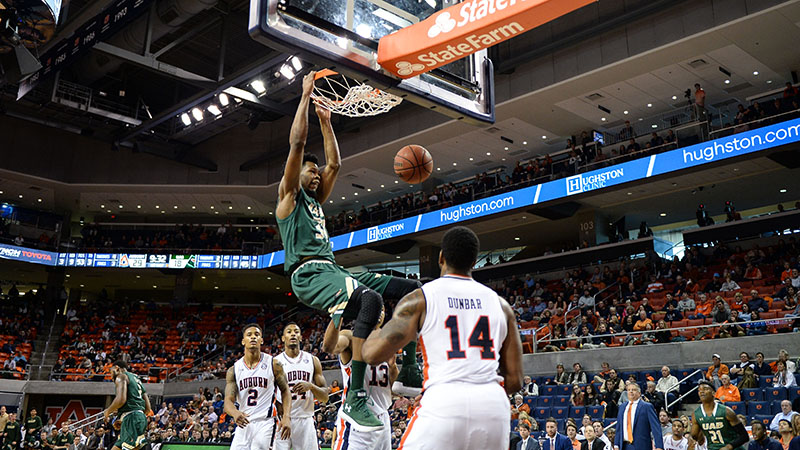 UAB’s William Lee dunks against Auburn this past season. Lee played for the Memphis Grizzlies in the 2018 NBA Summer League.(Submitted Photo | UAB Athletics)

Prior to the draft, Lee played in the Portsmouth Invitational Tournament in Portsmouth, Virginia against the other top 63 college seniors in the country. NBA and international scouts watched Lee average 9.7 points and 5.3 rebounds in the three-day tournament.

He went through a pre-draft workout for the Los Angeles Lakers alongside other top draft prospects including Anfernee Simmons and Sviatoslav Mykhailiuk.

However, it was the Memphis Grizzlies who called to invite Lee to join their 2018 Summer League roster.

The 6-foot-9 forward played in 10 games for the Grizzlies, who went 4-3 and advanced to the Summer League semi-final game.

In his summer league debut, Lee and the Grizzlies defeated Trae Young and the Atlanta Hawks 103-88. Lee managed to score two points and a rebound in his three minutes on the court.

He didn’t play in the 92-92 win over the Jazz in the team’s second game, but had his best game of the summer league in the 94-87 loss to the San Antonio Spurs.

In 23 minutes, Lee shot 4-for-7 from the field with eight points, four rebounds , a steal and a block.

His minutes on the floor for the remaining regular Summer League games varied from game to game. He played two minutes against the Pistons, 13 against the Magic, six versus the Kings and eight against the Thunder.

Before the playoffs began, he scored 21 points and had 16 rebounds in the six games he played.

He saw a boost in minutes during the playoff rounds, and the Grizzlies made it to the semi-final match against the Portland Trail Blazers.

Dallas County alumnus Lee works out for Lakers before…