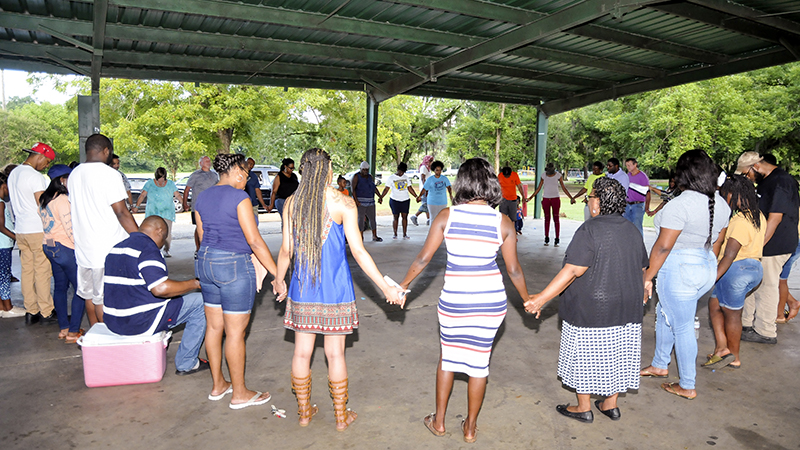 The Selma Together prayer circle grew larger as nearly 40 members of the community joined hands under the Selma-Dallas County Farmer’s Market at Bloch Park Monday afternoon to pray over their community.

Selma Together is a non-profit organization whose mission is to heal those among us who are traumatized by violence today, and to create healthy families and communities free of violence tomorrow through prayer.

“Tonight’s purpose was for unity,” Selma Together organizer Janice Hudson said. “Selma needs to be together. We know that unity is strength and that a lot of strength comes through prayer.”

Between readings of scripture from the Bible, several people volunteered to lead the group in prayer. They prayed for the well-being of the city of Selma, the families affected by gun violence in the city and for action to help make Selma a better, safer place to live.

“We’re aimed toward all of the violence that’s been going on for the past two, three, four years,” Hudson said. “We just need to come together so we can see some changes in Selma.”

One of the men who stepped up to pray was Stacy Crenshaw, father of 24-year old Leon Sanders who was shot and killed this past Saturday night.

“I think that starting somewhere is something that we have to do,” Crenshaw said. “I think this was a tremendous start, and we can’t stop though. This is the initiation of something that can turn into something very positive. I know that God has prepared me for things of this nature, and if you ask Him, He will supply all of our needs.”

The prayer meeting lasted just under an hour, but the time was filled with passionate calls for change to address the gun violence in the community.