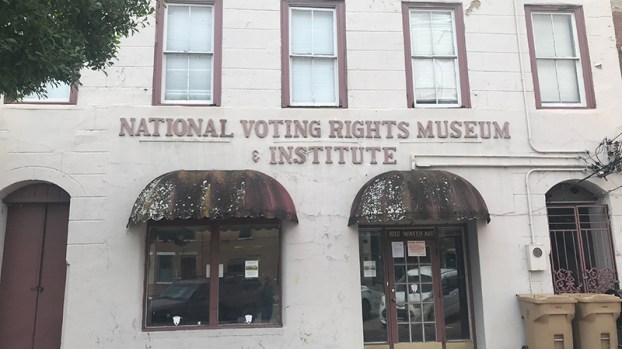 The City of Selma’s Code Enforcement Department is giving the National Voting Rights Museum & Institute 45 days to bring their Water Avenue building up to code or the city says it will demolish the building.

Code Enforcement Department official Natalie Shelton placed the letter on the 1012 Water Avenue property on Friday morning. She declined to comment on the situation for this story.

The back, which has not been occupied in years since the National Voting Rights Museum moved across the Alabama River to Selmont, has a large hole on the river-facing side of the building. The city’s letter said the cost to demolish the building will be the owner’s responsibility. The owner has 10 days from the posting to notify the Code Enforcement Office of its plan to bring the building up to code or destroy it.

According to documents from the Dallas County Courthouse and former Alabama Sen. Hank Sanders, the National Voting Rights and Museum & Institute owns the property.

Rose Sanders, Sen. Sanders’ wife, is out of town and did not return comment.

“The cause for this decision is that said building, structure or resident is a danger to the public’s health, posing a health risk to occupants and neighbors,” the letter said. “This danger may cause or air in the injury of occupants or neighboring structures which are usually liable to fire or create a fire hazard and liable to cause injury or damage by collapsing due to its condition.”

The building is in Ward 3, and Ward 3 City Councilwoman Miah Jackson is glad the city addressed the issue. She recently sent a request to the city’s code enforcement officials asking them to look at the building’s condition.

“I’m delighted to see the city take prompt action on my request to address this urgent situation,” Jackson said. “Hopefully, all involved will come to a quick remedy to help protect the citizens and their property.”

“I don’t know how they can do that because it’s a historic building,” Blackwell said. “They don’t have the right to tear it down. The city of Selma hasn’t gone through the Historic Development Commission.”