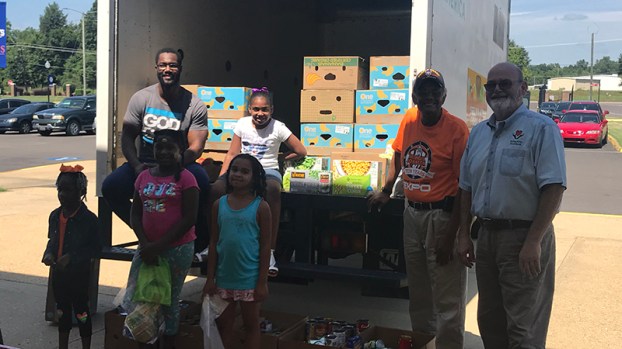 “This is the last event we do for the summer before football season begins,” Michael’s mother Thomasene Johnson said. “Michael comes home, and he interacts with the children.”

Michael has been involved in the Selma community since he was a student at Dallas County, where he was involved with projects like Habitat for Humanity and Lobster Fest. While at Georgia Tech, he helped organize a mentoring program for inner city kids called Brotherhood of Excellence. He continued giving back as a professional with the Boys and Girls Clubs and running camps here in his hometown.

The admission to this event was just a donation of a non-perishable food item to the Selma Area Food Bank.

According to food bank workers, the event brings in almost 500 pounds of food.

This year, there is a match of dollar per pound collected that also will go towards the food bank.

“We have people bring in canned goods to go towards the food bank, and once that is done they have entry to all the things we have going on,” said Michael. “There are a couple of health screenings as well that we like to offer before I go off to camp. We have all kinds of different giveaways.

“You want to be the change that you want to see,” said Michael. “You have to invest in home. We try to do that here in different ways just helping out when we can. The main thing is to provide information. Information leads to opportunity. We hope that this can help with better life choices.”

The Selma Police Department hired Broderick Givan almost five years ago. He has loved his job since. “I chose law... read more