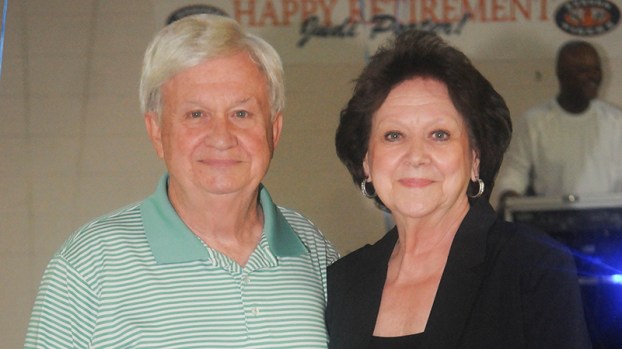 HAPPY RETIREMENT: Bill Porter poses with his sister Judi Porter who, after 30 years of service as a HR personnel for the City of Selma is retiring from her position. Judi is looking forward to enjoying retirement life.

There’s only one thing Judi Porter loves more than her family and Auburn University football, her job. After 30 years in the human resources personnel department for the city of Selma, Porter is retiring. Porter said her 30-year career started when then mayor, Joseph “Joe” T. Smitherman, offered her a job on the spot during dinner at Major Grumbles restaurant.

Porter said after working in the same department for so long she has made so many friends and has built life-long relationships with the people she works with.

“It’s been an awesome experience, and I learned a lot, but 30 years is a long time,” she said. “I just decided I would make that break.”

Working in human resources has taught Porter a lot, but one of the main things she said she learned was how to work with people.

“I learned a lot about people,” she said. “I’ve learned how to handle people and how to react to people with different personalities.”

Not only has Porter made good friends with the people in her department, she has also built a strong bond with local law enforcement as well.

“I have made so many good friends with my firefighters,” she said. “I call them my firefighters and my police officers because everyone comes to Judi.”

Porter said leaving is bittersweet, because of those relationships that she has made with so many wonderful people. She said even though she is retiring it may not be the last the office is going to see of her.

“I offered to come back on a consultant type of basis because I need to train somebody to take my place,” Porter said.

“I’ve always been proud of Judi my whole life,” Bill said. “She loves city government, and her personality is so outstanding. Everyone loves Judi, and we are so proud of everything she has done for the city.”

Dillon Kinard has been in law enforcement just shy of three years, and in those three years, he said he... read more