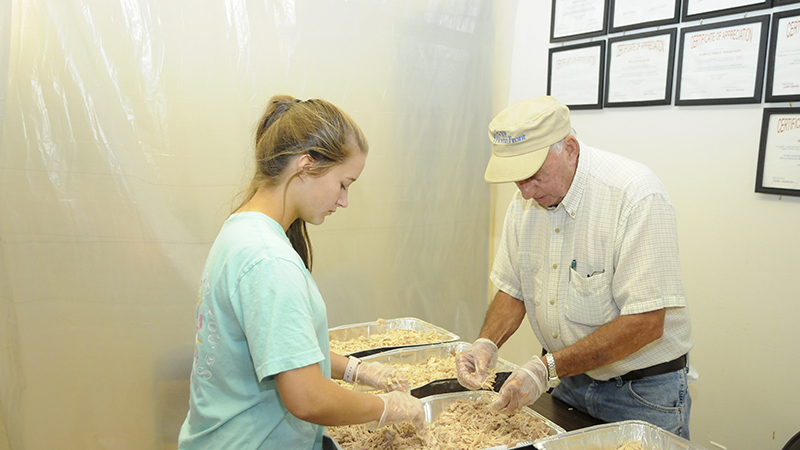 The Thomas R. Mackin American Legion Post 20 Brunswick Stew Sale is turning out to be a success.

Located on 4210 Highway 80 West, the Selma American Legion started its stew sale fundraiser on June 26 and has been making many sells since it began.

With the help of volunteers, the American Legion is expected to sell over 1,000 quarts of stew by the end of the fundraiser, breaking its previous record of 900.

James Cobb and Corri Spiegner, both volunteers for the American Legion, said they feel good about helping the legion and cooking stew for the community.

“This is how we get our funds to help veterans and different organizations,” Cobb said.

According to Cobb, the stew consists of many ingredients ranging from chicken, potatoes, corn and secret ingredients. He said he expects to sell many more stews before the closure of the fundraiser.

Charlie Friday, post commander, said he enjoys his time at American Legion and is proud of the stew sale and its benefits.

“I like the idea that I am doing something to help my fellow veterans around the nation,” Friday said. “This was started several years back, and it’s a little bit more sophisticated than it was several years ago. It is our main fundraiser, although, we do have other fundraisers. Our stew sales are our bread-and-butter when it comes to raising money. It helps with post operating and supporting the programs we support.”

Friday said the American Legion assists many organizations and because of the legion’s efforts, a system has been established to help injured servicemen.

“For servicemen who have been injured in battle, there is a hospital in California that started a system in order to move the veterans from one place to another so that they can get treatment,” Friday said. “It was all provided by American Legion”

Friday said the responses from the community in regards to the stew sale have been tremendous and nice. He said that many of the customers are reoccurring ones who come back each year to purchase the stew.