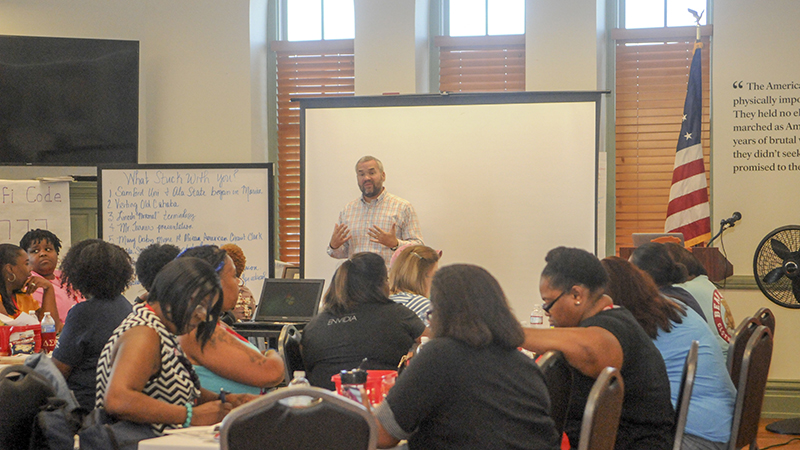 Summer Instititute: John Kvach leads a group of educators Wednesday at the Selma Interpretive Center in a discussion on the importance of oral history.

The Alabama Bicentennial Commission started its 2018 Bicentennial Summer Institutes in Selma on Monday, June 25. The Selma workshops focus on the story of Alabama, civil rights and the idea of storytelling.

Cook said after going through one of the workshops in 2017, she was then chosen as a facilitator.

A total of 30 educators are completing the four-day workshop in Selma, however, there are over 360 educators statewide that will be participating in workshops throughout the state.

“Once they signed up for the workshop, they received an email letting them know what workshop they will attend,” Cook said.

She said the workshops are social studies based and are a great way for educators to learn more about Alabama, and teach more in depth history lessons.

“Yesterday, we visited Marion and Lincoln Normal School, which is a historical site in Marion, Alabama,” she said. “We also visited the historical marker of Jimmie Lee Jackson. Yesterday was all about field trips and we got to visit the first state capital at Old Cahawba.”

Historian and professor John Kvach led the discussion at the Selma Interpretive Center on Wednesday, June 27. He spoke to the group about the importance of oral history. Cook said the knowledge provided by both Kvach as well as the workshop are imperative in the success for the future generation.