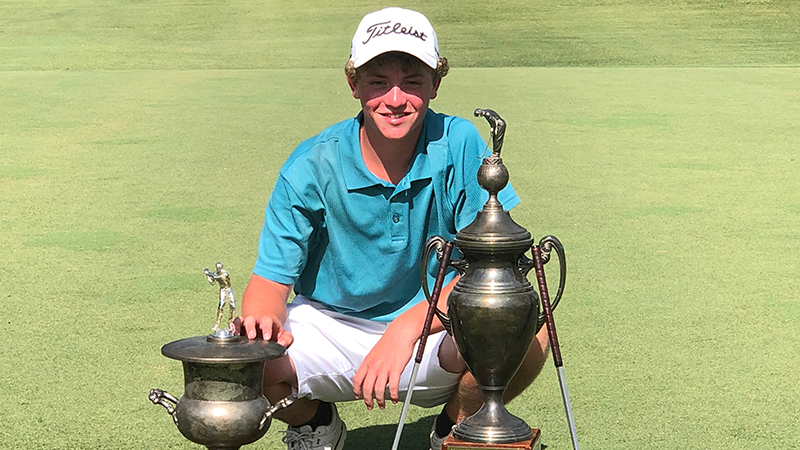 Jones Free, 15, won an AISA state title in golf with Morgan Academy, and continues to add to his trophy case over the summer. He came in first at the Bud Burns Dixie Junior Golf Tournament at the Selma Country Club.

Morgan Academy rising sophomore Jones Free recently won the Bud Burns Dixie Junior Golf Tournament at the Selma Country Club.
The 15-year old golfer was awarded with two trophies for his first-place finish and another for having the lowest score among the junior golfers that play at the Selma Country Club.
“I played pretty well all week and hit a lot of fairways,” he said. “But 36 holes in one day was pretty tough.”
The tournament was split into two days. Golfers played 18 holes on day one, and then two-rounds of 18 holes the next day if they made the cut.
Free shot a 70 in the first round, which was good enough to make the cut and continue playing.
In his second round, Free shot a 74, but saved his best for the final round where he shot a 69.
His driver was working well for him, and he recalls just missing one fairway.
The putting was a bit challenging, according to Free. But he managed to sink 8-10 birdies over the course of the tournament.
“I ended up winning by five (strokes),” he said.
The Bud Burns tournament was just one of a few tournaments Free will be playing in this summer. He’s currently in Dothan for the Future Master’s tournament competing against a field of 239 other golfers.
“It’s one of the biggest tournaments of the year,” he said. “I’ve been coming to it the last three years. The competition is really tough, but I’m going to do my best.”
Free was a part of the Morgan Academy AISA state championship golf team this past season. Usually the off season is where student-athletes prepare for the school schedules, but for Free it’s the other way around.
“I feel like it’s the other way around,” he said. “The tournaments I played for my school are preparing me for tournaments like these.”