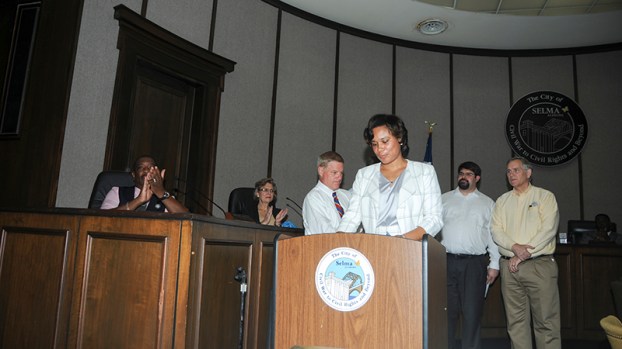 The Ward 3 Councilwoman delivered a presentation in her Residence in Service Equally United in Partnership (RISE UP) at Tuesday’s City Council meeting at City Hall.

“Citizens of Selma are familiar with battles and struggles through family stories or personal involvement in the movements that shaped the history of our state, country and even the world,” Jackson said. “Selma is a City where resilience and grit are virtues fed to its children like southern cornbread and sweet tea.

“This recurrent diet of perseverance through struggle has empowered us with a certain steadfastness and hope in God enabling us to rise up to adversities and hardships,” Jackson said. “Rise up when personal responsibility and accountability calls us to higher altitudes and rise up to new aspirations.  Selma, we will Rise Up to a better future.”

After the presentation, Jackson handed the pastors and Steward and Harrellson each a glassed frame of her poem, “RISE UP Selma.”

The RISE UP campaign will be at 8 a.m. on Saturday, July 14 at Cornerstone Church to start trash cleanup in Ward 3.

“RISE UP isn’t just about Ward 3, it’s about the whole city,” Jackson said. “I’d like to thank the businesses and residents for staying in Selma. The best is yet to come. Better days are ahead. We need to come together, and put our pride and politics aside to change the narrative in Selma.”

It has been 17 years since Terry Chestnut planted the cactus plant in his yard, and now it has gained... read more