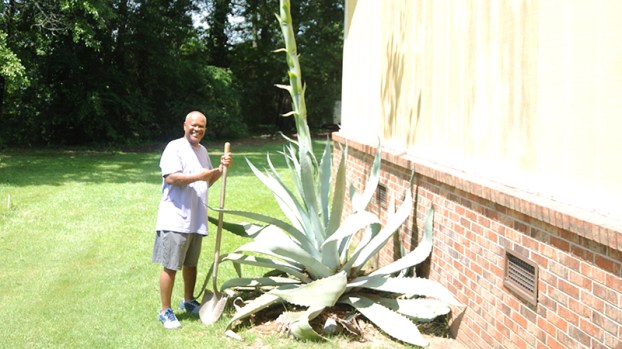 It has been 17 years since Terry Chestnut planted the cactus plant in his yard, and now it has gained notoriety as a stalk has grown so high that it has surpassed his two-story house at almost 20-feet tall.

Chestnut said that he first received the plant from a friend in Montgomery.

“Her name was Rita Collins, and she was 97-years-old when I got the small plant from her,” he said. “It is spreading around town as the ‘Jack and the Bean-Stalk’ plant.”

“I didn’t pay attention first,” said Terry. “She kept asking me about it, and she said it was unbelievable. So, I came around to look at it, and I couldn’t believe my eyes. When I first saw it, it was at the window level, and it seemed like every two days, it got taller.”

At the end of the stalk, blooms have started forming, and Terry and his wife, Sandra, are not sure what to expect from the blooms.

“Your guess is as good as mine,” Terry said. “All I know is that it is some type of cactus, but I have never seen a cactus do this.”

Terry said he considers himself an “amateur gardener” and that his property has rich soil, and he is amazed that the plant has continued to grow.

Sandra said that after her research online, she found out that it is an Agave Cactus, but even people she meets on her mail carrier routes who are gardeners could not explain the tall stalk.

“We don’t know what to do with it,” she said. “Our granddaughter calls it the Jack and the Beanstalk plant.”

Terry said that he hopes that someone will be able to give him advice on how to continue to care for the plant.

Marquavious Benjamin, 19, of Selma, was captured by law enforcement on Tuesday morning after a weekend search. Benjamin was charged... read more