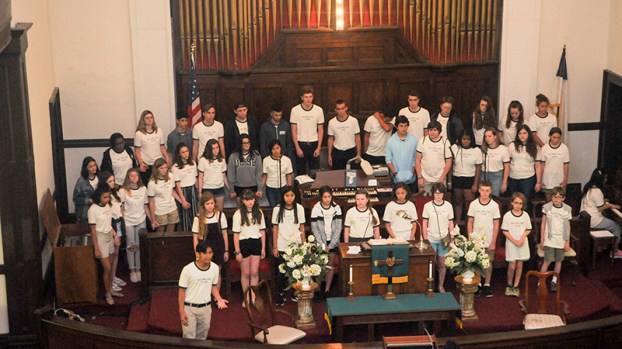 The 55-member choir from the All Saints Church in Pasadena sang “Hush, somebody’s calling my name” and “MLK” among their music selections.

But it was O’Neill who received a standing ovation, hugs, handshakes and loud applause from the choir as she recalled memories of Bloody Sunday on March 7, 1965. That day, Edmund Pettis Bridge where the Rev. Hosea Williams and John Lewis was gathered over 500 marchers before the historic march. Alabama state troopers attacked participants with nightsticks, tear gas and whips after they refused to back down.

O’Neill was 16 at the time, as the Selma to Montgomery March eventually led to then-President Lyndon Johnson signing the Voting Rights Act on Aug. 6, 1965.

“It was not a political move, it was a spiritual move,” O’Neill said. “Things changed after the march. It shaped me.”

“There is a growing movement among choir directors to offer the healing power of music through choral concerts,” Tisi said. “I drew up this big wish list of places I wanted to go — from California to the East Coast. It was way too big. Then I called Mike Kinman, said ‘this is an idea I have, what do you think? And he was just like ‘I’m there. Tell me what I need to do.’”

The 10-day tour started Thursday in Atlanta, then stopped in Montgomery, Birmingham and Selma.  The tour will later perform in New Orleans, Memphis, Ferguson, and St. Louis before returning to California on June 30.

Hyche shows how her actions are stronger than words

Robin Hyche has been a member of Elkdale Baptist Church in Selma for six years now. “I came here because... read more