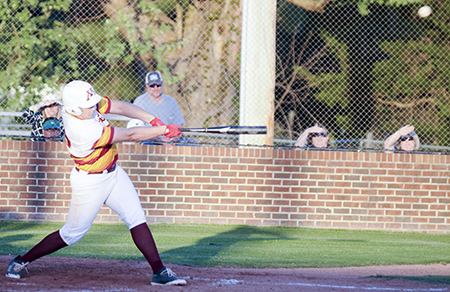 Morgan's Sawyer Hopkins hits a two-RBI single earlier this season. He was one of five first-team all-county selections from Morgan Academy.

The local high school baseball talent here in Dallas County put up strong numbers worth consideration for the 2018 Times-Journal All-County team. Local coaches nominated student-athletes from Morgan Academy, Meadowview Christian School, Selma High and Southside High School based on their performances on the diamond this past season.

Hopkins, a senior first baseman and pitcher for the Morgan Academy Senators, was a valuable run-producer this past season. His batting average was .302 and had an on-base percentage of .529 while driving in 24 RBI’s.

His presence in the middle of the order was matched by his abilities on the mound.

In eight appearances, six of which were starts, Hopkins maintained a 4.o ERA over the course of 36.2 innings pitched. His record as a pitcher was 4-4, and he had 24 strikeouts and 16 walks.

Sam Plummer played right field for the Senators and was a consistent hitter at the plate. He hit .438 this past season with a .511 OBP. His 21 RBI’s was the third-highest on the team.

Egbert patrolled centerfield for the Senators and recorded a .982 fielding percentage. At the plate, his batting average (.462) and OBP (.484) were both very impressive. He drove in 18 runs and only walked twice this past season.

The Senators RBI leader, however, was junior infielder Brayton Brown. In 108 plate appearances, Brown hit .422 with five home runs and 37 RBI’s. His 23 walks helped boost his OBP to .556 for the season. As a team, the Senators consistently got on base to give Brown plenty of opportunities to drive them in.

The last Morgan Academy representative was the team’s everyday catcher Xavier Green. It’s a feat within itself to put on the mask for 30 games in a tightly packed season, but it didn’t hinder Green’s hitting ability. He finished the season with 19 RBI’s, a .387 batting average and a .524 OBP. Behind the plate, he caught 17 percent of the base stealing attempts against him.

Meadowview Christian School played in the Alabama Christian Athletic Association (ACAA) last season, but what Jeremy Lee did for the Trojans would be impressive on any diamond in any league.

The ACAA All-state selection and state tournament MVP was 8-1 and struck out 95 batters. He nearly had a perfect game this past April, but ended up with just a complete game, no-hit shutout in a 9-0 win over Victory Christian School (Columbus, Mississippi).

When he wasn’t pitching, Lee was at shortstop and he hit .634 at the plate with eight home runs.

ACAA all-state selection Garrett Breach played multiple positions for the Trojans. As a pitcher, he was 5-2 with 30 strikeouts. He also hit .420 during the season.

Chambers McGilberry was another ACAA all-state selection who batted .410 this season with only four walks. He struck out 16 batters as a pitcher with a 3-1 record.

Sanders led the Saints in runs scored and batted .317 on the season. He played centerfield and was also an effective starting pitcher for his team.

In addition to the first-team All-County selections, there were several other players deserving of an honorable mention.