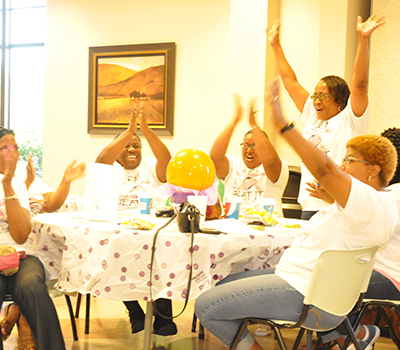 The American Cancer Society hosted an award ceremony Monday to recognize the 2017-2018 Relay for Life Dallas County participants.  Alvin Craig, Relay for Life event team lead, said he is happy to celebrate a job well done and a mission accomplished.

“Every year we do the award ceremony to recognize and thank everyone for the hard work they put in,” he said. “Not only do we do this for a good cause, but we are also recognizing those that helped us with the fight against cancer.”

Representatives from each team received medals and a plaque for participation in this year’s Relay for Life Dallas County.

In addition to receiving awards, the participants also had a chance to let their hair down and play a few games after refreshments.

Craig hopes the recognition will help with participation in the future.

“Hopefully, this will inspire people to become a part of Relay for Life,” he said.

Cancer survivors, caregivers and Real Men Wear Pink organization were given special recognition because of their role in the fight against cancer. Throughout the year, sponsors helped toward the cause in different ways, and they were also awarded for their continued participation.

The Selma Times Journal was amongst the organizations to receive a sponsor’s plaque. The newspaper was awarded for media coverage of the before, during and after relay events.

Will Whaley, editor for the Selma Times Journal, said he is happy the newspaper played a part in the cause.

“We are happy to encourage and cover a group like the American Cancer Society and this noble cause in helping cancer patients everywhere,” Whaley said.