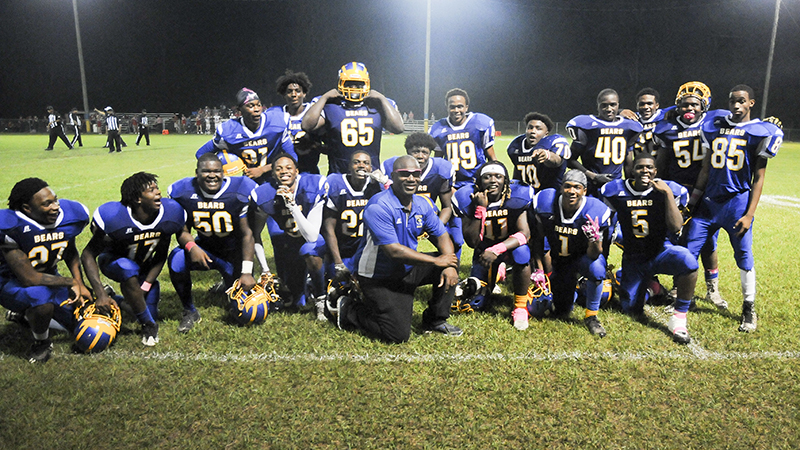 Fans and former players went to Facebook to voice their support and appreciation for Crum’s work as a coach, leader and mentor.

“‘Preciate you for the best five years I could’ve ever had while playing varsity football,” former Keith quarterback Maurice Crumpton posted on Facebook. “I’ve been a part of three (8-3) seasons since my first time dressing out in the Blue and Gold (2008-2013). Would have never wanted to play under any other coach!”

After his senior season, Crumpton signed his letter of intent to play college football at Stillman College.

Crum responded to his former quarterback by recalling his first touchdown catch as an eighth-grader against Central, and he still knows how many touchdowns Crumpton scored in his playing career (72).

“You made coaching easy for me,” Crum replied. “I am proud to be a part of your life.”

Former player David Alexander (2007-2012) also posted a shout out to his former football coach thanking him for the impact that Crum had on his life.

“I’m appreciative of what you did. The person you were could never be replaced,” he wrote. “You meant a lot to people that you coached… You showed me what being a man consists of. From a great father, to being a great coach and great man… I don’t know why they chose to let you go, but I’m thankful for the 6 years we had together. Keep the fade low and tight coach.”

Even those who didn’t play for Crum were disappointed to hear the news that he was no longer the coach for the Bears.

“Coach Crum is more than a coach,” a woman whose name on Facebook is Bre Bre posted. “Thank you for going out of your way when you didn’t have to!! It’s the small things like making our senior slide show I appreciate!!!”

Nicole Milli Mac’s post attracted 30 comments, 23 shares and 141 reactions from followers who saw her comments praising what Crum had done in the lives of her brothers who played quarterback at Keith.

“He not only coached them on the field, but off the field as well!” she wrote. “He taught them the values of hard work, being fathers, and to this day; how to be men! If Crum had not been in their lives, they could’ve and would’ve been another statistic. He has stood in those Father shoes, not only for my brothers, but for many of those young men!”

The social media reaction from people in Orrville, Selma and beyond revealed how much Crum really meant to those who were a part of the Keith community.