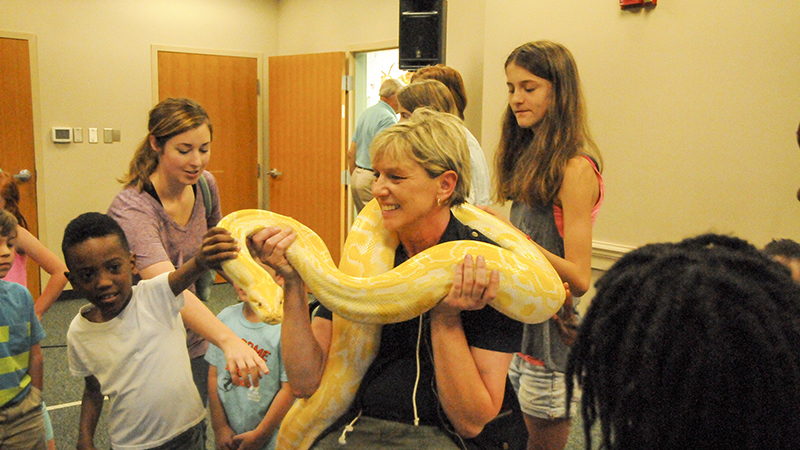 Yarbrough’s Education Reptiles, operated and owned by Rebecca Tucker, visited the library to showcase various reptiles and provide detailed information regarding them to the many children who participated.

Debbie Tarpley, a parent who brought her son to view the reptiles, said that her child was excited to see the coldblooded animals. According to Tarpley, she, along with her son, had already attended many of the library’s events, and expects to return for many more.

“We’ve got several marked on the calendar, even for this week,” Tarpley said. “We want to come to the circus event, some of the puppet shows, and there’s another reptile show in two weeks, so we want to come to several more.”

Brandi Knight, another parent, heard about the reptile showcase from her children, who she said were thrilled to attend the event.

“I have four kids, and they heard about it from the little flyers when we came to check out books last week,” Knight said. “This was the excitement for the whole summer. They wanted this one.”

According to Knight, her children have a great love for reptiles.

“They were very excited,” Knight said. “They were most excited about the alligator. I think it was very good for them to see. It was very educational, especially with the snakes.”

Many reptiles were shown ranging from small lizards and snakes to big alligators.

Tucker said that she has always had a huge fascination for reptiles. Being raised around the creatures allowed her to see past their negative stereotype. She teaches children important facts about reptiles, in hopes of removing any fear they may have about reptiles. She gives all the credit to her parents for the career she currently has and loves.

“My parents are the ones who started this program about 51 years ago, going to schools and libraries and doing safety programs for some of our companies,” Tucker said. “So, I’m just a chip off the old block. I was raised around all the animals. I never thought for a minute that I would be doing the programs myself, but after the passing of my dad, my mom began the programs and she had never done one either. When she got sick she asked me to and I just went on ahead and did it. And now, here I am today and I’m enjoying every moment of it. I’m just sharing the information that I learned about reptiles because I grew up around them; it’s just kind of sharing my personal information. To see their little faces and to get their attention amazes me that I can captivate the attention of such a young audience.”

Along with being taught about the reptiles and their characteristics, Tucker also granted the children the opportunity to touch two of the reptiles: the alligator and a python.

Tucker feels a quote by Tom Crutchfield, a world-renowned herpetologist and close friend of hers, heavily represents what her program stands for, “the difference between fear and appreciation is knowledge.”