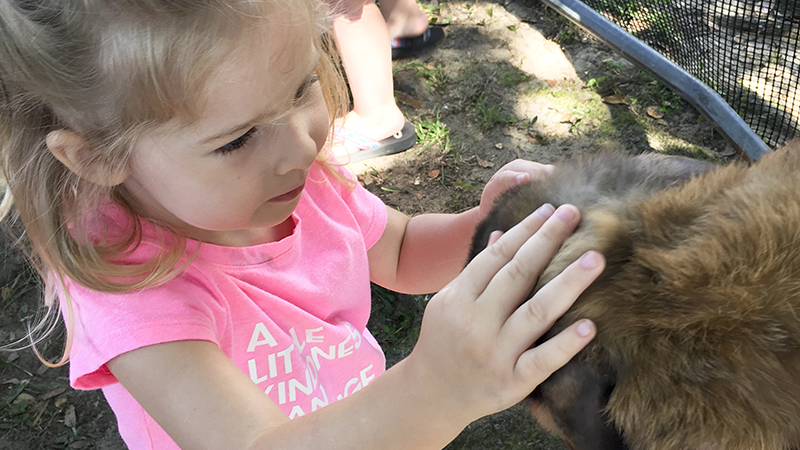 Eager children lined up in front of the Selma – Dallas County Public Library Thursday morning to pet baby farm animals. The Grace Petting Zoo patterned with the library as a part of the library’s Sensational Selma Summer 2018.

“We just had a wonderful day, Nichols said. “We had several hundred people having a great time, eating a popsicle and enjoying baby animals on a warm sunny day.”

Nichols said times have changed and children don’t get to see as many farm animals as they once did.

“Long ago everybody grew up in the country or you had country relatives, and now that you don’t just to even see a baby chicken or duck is impossible,” she said.

Children were also able to cool down while outside enjoying themselves.

Sheryl Smedley, Chamber of Commerce executive director, passed out popsicles to the children after they visited with the animals. She said she was happy to see how excited they were about being around the animals, so as she gave them their treat she asked which animal they liked the most.

“The winner of the day were the pigs,” she said. “It was between the rabbits and the pigs.”

Much like Nichols, Smedley talked about how farming was once a way of life in the community and how now, with a decline in the amount of local famers, children are less exposed to farm animals.

“This is the only opportunity that most of these children ever have up close to an actual farm animal,” Smedley said.

Jenny Murphy started Grace Petting Zoo around 10 years ago as a rescue for farm animals. After the enormous amount of fees it took to feed and properly care for the animals she started having petting events.

“I would use them in my nursing home ministry and take them to old folks, and they just loved it,” Murphy said.

After seeing the response and also needing to raise money to feed her beloved animals, Murphy thought petting parties would be a good help.

“I started doing petting farm parties for churches and schools and birthday parties,” she said.

Even with the petting parties, it is still expensive to properly care for and feed the animals. Knowing this, Murphy’s concern is not about making a profit on the parties, it is about ensuring the well-being of her animals.

“I love the Lord and I love my animals,” she said.

Each animal has a biblical name, and is Murphy’s way of introducing the children to learn more about Christ, and even the name of the organization has a special meaning. “Grace” is an abbreviation for God’s Riches at Christ’s Expense.

The bond between Murphy and her animals is strong, and she feels they were created for a greater purpose.

“I feel close to the Lord cause I know they are his creation he gave us to make our life more pleasant,” she said.