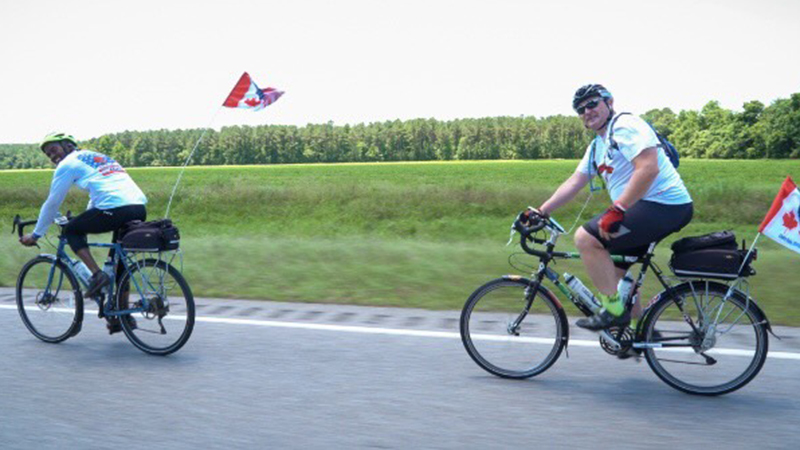 Andre Block and Jonathan Williams are cycling from New Orleans to Toronto for the 2018 Unity Ride. The mission of the ride is to prove that a goal can be accomplished despite having different views and backgrounds. (Photo: David Bratnick and Monty Ross)

Andre Block and Jonathan Williams are two men with very different backgrounds, but for the second year in a row they’ve come together for a cross-country cycling tour to encourage the unification of our country during a time where politics, race and other social issues have shined a light on how ugly a divisive America can be.

“Just because people are different, doesn’t mean you can’t come together and work together on a common goal.” Williams said.

Block, 37, and Williams, 42, both reside in Knoxville, Tennessee, but they first met on New Year’s Eve in 2015 when Block was preparing for “The Karma Ride.” His upcoming cross-country tour from Knoxville to Los Angeles to raise money and awareness of Lupus disease.

Williams was unable to join Block for that trip, but he was able to ride with Block the following year in November for the first “Unity Ride.”

The avid cyclists have learned a lot about each other since they started riding together, but their differences never got in the way of their mission or their friendship.

“We have a lot of differences,” Block said. “We handle things and approach situations in different ways, but what we’ve found is that we want the same end result.”

One of their goals is to break down the barriers between people with opposing views who refuse to engage in a dialogue  with each other. They believe that the divisiveness in the country isn’t helping moving America forward.

“There’s still a lot of issues that still need to be addressed and resolved,” Williams said. “The only way that’s going to happen is if you sit down and have a dialogue. I think as long as you can start a dialogue with people that you tend to disagree with, then eventually you’ll come to an agreement.”

Conversation brought together a conservative, white military veteran from Eatonton, Georgia, and a liberal black man from Tulsa, Oklahoma. Their life experiences and political leanings are different, but their mutual respect allows them to understand each other’s approach.

“We agree on a lot,” Williams said. “We disagree on a lot too, but at the end of the day we can sit down, drink a beer, laugh, get on bikes and ride. We can do a lot of things together without having that affect anything personal.”

Sometimes the disagreements aren’t as one-sided as they seem.

“Even in one of our disagreements, we were really just coming from two different angles,” Block said. “We were approaching the situation in different ways, but we were still headed towards the same goal.”

Block and Williams began the 2018 Unity Ride in New Orleans on Memorial Day. The two cyclists, and the film crew documenting their journey, will bike all the way to Toronto, Canada. A straight shot would cover just more than 1,400 miles, but Block and Williams are taking the long route to follow a path of freedom when the country was divided once before.

The theme of this year’s Unity Ride is “Exploring Freedom,” and it was Block’s idea to trace the legendary Underground Railroad and visit the historic towns and sites along the way.

“I came up with the idea to try and make a difference specifically in my culture,” Block said. “I feel like there’s a lot of heroes that are missing in our history, and I want to highlight them too.”

Blacks escaping the bondage of slavery used the Underground Railroad to find their way to freedom, and they received help along the way from men and women willing to defy the law.

“There was a lot of people, white and other free-Blacks, that were helping them get to freedom,” Williams said. “That’s what this ride is all about. Even 155 years ago, people were really trying to work together because it was the right thing to do. Now we’ve kind of lost a little of that over petty political arguments. Where if you just come together because it’s the right thing to do, then the world will be a much better place.”

The route includes visiting places with important cultural markers such as the Edmund Pettus Bridge in Selma, the John Rankin House in Ripley, Ohio, and the Harriet Tubman Church in St. Catherine’s, Ontario.

In each city they visit, Block and Williams aim to learn more about America’s history. The visit to Natchez, Mississippi, where they learned about the Natchez slave revolts had a huge impact already on the cyclists.

“Slavery was awful,” Williams said. “Learning what happened in Natchez, Mississippi, just opened my eyes to so many things.  When you’re there and reading about this stuff, it gives you chills about how we treated each other 150 years ago. It hadn’t been that long.”

Throughout their journey, the cyclists are also taking an interest in meeting and creating a dialogue with the people they meet along the way. Initiating a conversation without hostility and party-blinded bias to discover what can be achieved when different ideas come together instead of bump heads.

Block and Williams arrived in Selma on day six of their ride, and have already been blown away by what they’ve learned so far. Before getting back on their bikes and riding to their next stop in Montgomery, Block and Williams spent part of their day Wednesday learning about Selma’s civil rights history.

Traveling with Block and Williams is a film crew lead by producer Monty Ross.

He has co-produced popular films such as “Do the Right Thing,” “She’s Gotta Have It” and “School Daze.”

In his first year with the Unity Ride team, Ross is also having an experience of his own.

“I felt it was very important to be a part of a project like this because when you have two people who are very passionate about coming together and understanding their differences,” he said. “We’re at a time in our country when it seems we are more divided in some respects, but it’s the type of division where people are at least talking about it.”

The Unity Ride will take several weeks to complete, and the team is scheduled to complete their ride in Toronto on July 1. For more information on the Unity Ride, visit gounityride.com.