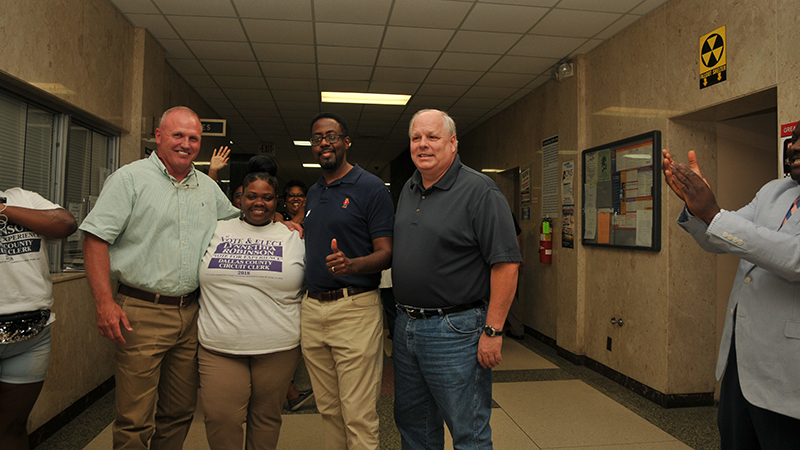 He got his wish Tuesday night, defeating Michael D. Goings 5,933 to 4,749 in the Sherriff’s race. Granthum won by 52 percent of the vote, compared to Goings at 42 percent. Earnest Donaldson was third with 615 votes.

“I’ve campaigned long and hard for 11 months,” Granthum said. “It’s been a long road and a lot of people made it happen for me. I’ve been a police officer in Selma for 20 years. I’ve gone from bicycle cop to Dallas County Sherriff.

“The win shows how much confidence Dallas County residents have in me,” he said. “I love Dallas County. Nobody will work harder than me.”

In the State Representative District No. 67 contest, Prince Chestnut handily defeated Jelani Coleman, receiving 75 percent of the vote. He had 7,750 votes, compared to Coleman’s 2,546.

“I hit the ground running and we got a lot of things accomplished,” Chestnut said. “I look forward to working with the newly elected officials in Selma and improve the quality of the district. We can make improvements in the District.”

“I wouldn’t be here if not for my father, Leonard Robinson,” Lynnethia said. “He was my biggest supporter. He worked hard just like I did. I focused on running the campaign and prayed about it.”

Here’s what happened in Tuesday’s other primary races:

“This is my fourth term, but it was the time I had an opponent,” Dailey said. “I look forward to keep serving the county.”

In the Dallas County School Board District 3 spot, Mamie Williams-Solomon won with 888 votes. Frank Chestnut Sr. was second with 395 votes, followed by Carolyn Calhoun-Bates at 353.