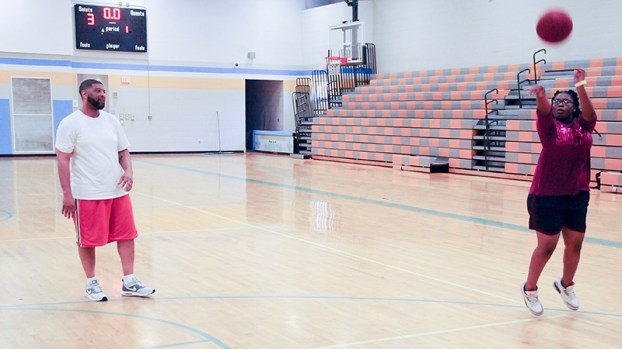 “It’s actually good being back home,” he said. Being here at Selma High on this floor is like sacred ground. Growing up as a kid in Selma, this is our Boston Garden.”

The kids who attended the clinic were already sweating 15 minutes into the workout as Doc led them through fundamental drills working on everything from ball handling to shooting form.

“It’s just about giving back and trying to give the kids some skill work that I got when I was coming up,” Robinson said. “I’m trying to just pay everything forward. Everything that I learned from the game of basketball, I’m trying to pass along to the younger generation.”

Doc’s legacy at Selma High made him one of the best players to come through the school.

He was a guard for the Saints from 1992-1996. He’s the first and only All-American in Selma High history.

During his sophomore year, the Saints won the state championship and Doc was selected to the state all-tournament team

As a senior, he was ranked the No.1 player in the state of Alabama and won the State Gatorade Best Player of the Year.

He then played at Auburn University from 1996-2000 where he became one of the first two All-Americans in Auburn history and a two-time All-SEC selection. He’s 15th on Auburn’s all-time scoring list with 1,332 career points and third in career assists (568).

Doc is now based in the Atlanta area where he trains and prepares young basketball players to go even further than he did. Players like Malik Beasley (Denver Nuggets), Kobi Simmons (Memphis Grizzlies), Jordan Usher (University of Southern California), Alex O’Connell and Wendell Carter Jr., (Duke University) have all trained with Doc to get them to the next level.

Selma High head basketball coach Ronald Lane had two of his players in the gym with Doc working on their skills. Doc’s name carries a lot of weight in Selma, and Lane felt it was important to have a school legend back in his home gym.

“This is what we hope to be the first annual Julius ‘Doc’ Robinson Skills Camp at Selma High School,” Lane said. “Everybody in the surrounding area and people all over the Southeast know about Doc. He’s just coming back into the community and doing some skill work with these kids.”

Those who came to the camp walked away with new drills they can practice and tips that Doc passed on to them.

“Doc has played on such a high level under a lot of good coaches,” Lane said. “Some of the things that he’s picked up along the way, he’s bringing them back and adding it to what we do here.”

The Francis Marion High School and R.C. Hatch High School football programs were presented with a donation of $2,500 each... read more