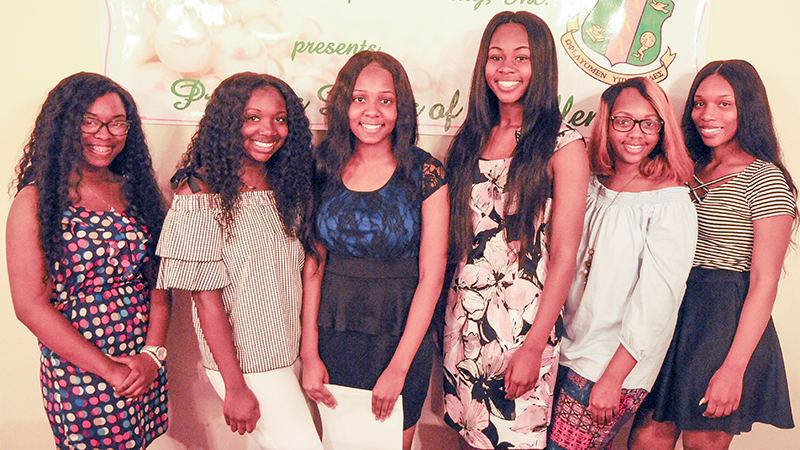 The members of Alpha Kappa Alpha  Sorority, Inc. (AKA), Zeta Eta Omega Chapter were delighted to honor the graduating seniors of the Culturama Club with  a scholarship reception on Thursday, at the Women and Youth Service Center.

Delectable hors d’oeuvres were served to the proud parents and the winners of 2018 scholarships which amounted  to more than $14,000. The Senior Culturama Club is one of the chapter’s four  mentoring groups that was organized in l972 and has annually awarded thousands of dollars to local high school graduates.

Dr. Willietta Conner, the Culturama senior advisor praised  the young ladies for their academic  accomplishments. Dr. Tanya Miles, chairman of the Scholarship Committee challenged the winners before awarded the scholarship money. “Congratulations!  You are all winners and leaders,” she said. “ There is  leadership potential in each of you just waiting to be discovered!  Go for it and use this  scholarship check to help you become that destined leader.”

Kendra Angion, a graduate of Dallas County High School, received $3,300. She plans to attend Alabama State University and major in Secondary Education with a concentration in English.

Ashunte Pettus, a graduate of Southside High School, received $300. She plans to attend the University of Alabama and majoring in Engineering.

Destiny Hardy, a graduate of Southside High School, received $50. She plans to attend University of South Alabam and major in Chemical Engineering

The Scholarship Reception was an enjoyable event  as members of Alpha Kappa Alpha congratulated the winners. Dr. Victoria Calhoun, presented the winners with a challenge, encouraging them to always do their best and to follow their dream and reach for the stars!