Highest UA honor given to Selmian 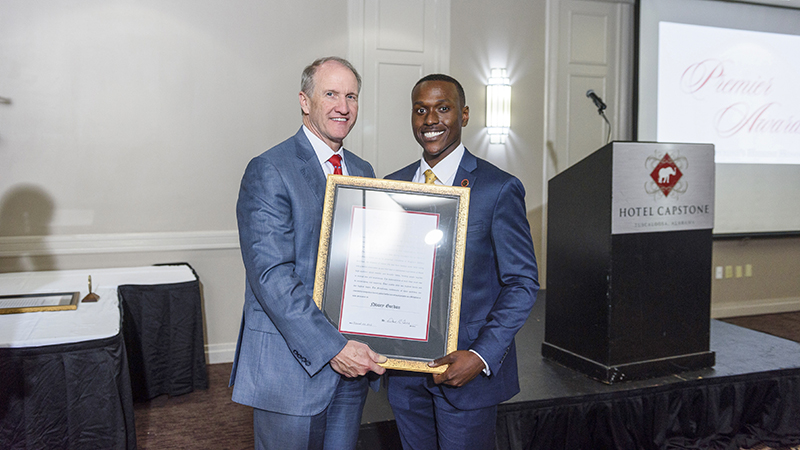 Each year, the University of Alabama presents six premier awards to current students, which are the highest honors given to the students. This year, Selma native Nivory Gordon III received the Algernon Sydney Sullivan Award.

Gordon, a 2014 graduate of Selma High School and 2014 Gates Millennium Scholar, said the recognition was surreal.

“I cried when I was notified and just gave God the glory because I turned in the application with two minutes to spare before the deadline passed,” Gordon said.

“When I applied [for the scholarship], I never expected nor intended to win because I knew there were a lot of great students at UA,” he said.

Not only is Gordon a scholar he has served in a plethora of leadership roles in many organizations at the University of Alabama.

Along with the premier award, he was also named 2018 Greek Man of the year and 2017 Alpha Phi Alpha Alabama District College Brother of the Year.

In order to be considered for the award, a member of the university’s administration has to nominate the student for the honor.

“The Assistant Dean of the College of Engineering nominated me,” he said. “I wrote a five-page essay based on the Character of a Man.”

This year Gordon spoke at the Dallas/Wilcox BAMA awards banquet, and said it was great to offer advice to the students.

“The Dallas/Wilcox BAMA club awarded me a scholarship four years ago, so to have the opportunity to come back and speak to students who were sitting in the same seat that I sat in was extremely humbling,”

Gordon will be attending Law School in pursuit of becoming a litigation attorney focusing on Intellectual Property, Energy & Regulatory Law.

“It is my hope to run for a political office on a national level one day,” he said.