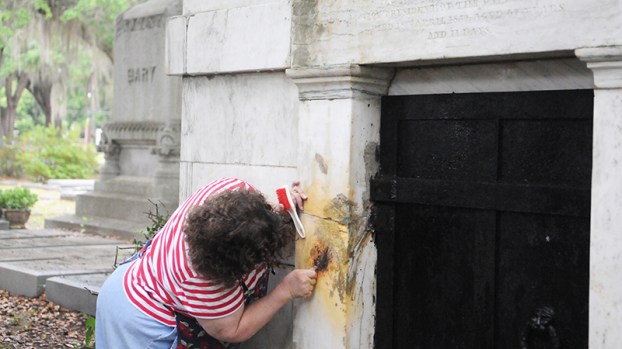 The project was originally supposed to be comprised of solely members of the Old Town Association, but word got around and some residents showed up wanting to help. The group was happy to take whatever help they find.
Both King and Turner have a decorated history in Selma. King is credited as the founder of Selma and naming the city. He is the highest public official in Alabama’s history, reaching to the Vice President’s office for the Franklin Pierce Administration in the 1850s.

He served as U.S. ambassador to multiple European countries and helped see through deals such as adding the Republic of Texas as a state in the U.S.
Benjamin Sterling Turner was a former slave whose intelligence guided his way through his life in Selma. During the Reconstruction Era of American History, he became the first African-American in Alabama to be elected to the U.S. House of Representatives. During this time, he fought for the protection of African-Americans and advocated for the amnesty of former Confederate officials, believing it was needed for the nation to heal.

In Selma, he oversaw the maintenance and management of the historic St. James Hotel on Water Avenue. He is also responsible for the rebuilding of the St. Paul’s Episcopal Church following the destruction of the Civil War.

For members of the Old Town Association, they wanted to make a difference by showing they honor the history embedded in the city. Member Stan Lewis said that he is happy with the turnout of people wanting to help with their efforts.

“We had a good group of people. I am proud of Old Town and our residents,” Lewis said. “There is a lot that needs to be done. It just hasn’t been cleaned in a while.”

The turnout also included veterans such as Jeffrey Bennett, Joyce Allison, Stephen Brooks and Rich Raymond. Wanting to lead by example, they showed up to do their part.

According to Lewis, fellow Old Town member David Tipmore and Dr. Gery Anderson, they want to expand their efforts to across the city.

Anderson, who is credited with facilitating the restoration project, wants to restore monuments located in the downtown area of Selma as well as continue their efforts in Old Town. For him, a longtime resident of Selma, he likes seeing people take the initiative to preserve the history.

“The most incredible thing is people appreciate the history here,” Anderson said. “I think that is why people came out today.”

As the Old Town Association continues their efforts in keeping Selma beautiful and historic, they appreciate the help received from committed residents.

By Adam Dodson The Selma Times-Journal Residents and businesses on Saturday received an opportunity to get rid of sensitive documents... read more