Charlie’s Place served guests from all over 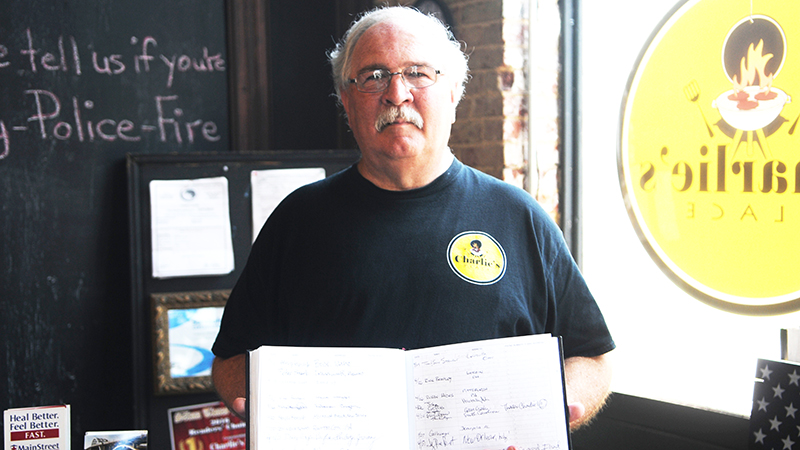 By Derrick Thomas
The Selma Times-Journal

Charlie’s Place, a restaurant based on Water Avenue in Selma, is closing after two years of serving. Though, despite the sadness of the closure, Charlie Morgan, owner, recalls many great memories.

Most memories that were made had been recorded within the pages of restaurant’s guestbook. Morgan mentions that he does not have an exact number of how many visitors have visited his restaurant and signed his guestbook, however, he states that currently he has 30 pages with 12 names signed on each.

Many people from around the world who have come to visit Selma, have also stopped by to receive a meal at Charlie’s Place.

Despite normally having trouble acquiring many customers, on May 17th, he managed to garner many. Morgan stating, “today is a busy day. It would be nice if it was like this all the time.”

Currently, Morgan is still attempting to construct plans for the future.

“Right now, I’m not sure. I do have a trailer I carry around and do private catering with. I’m probably gonna go into that, but I’m not sure yet.”

Morgan optimistically considers himself “semi-retired” for the time being.

“Mr. Charlie is a good boss. I’ve been working here ever since they opened the doors. I like here. I’m going to miss it,” Craig said.

Both employees also mentioned that meeting visitors from a variety of different countries was an exciting experience.

Morgan states, that owning and conducting a restaurant can be quite difficult, as the amount of food and customers are both important.

“The biggest thing I’ve liked, is that I met all of these people from all over the world and had a chance to talk to them. Hopefully they left with a good impression of me.”

As a closing statement, Morgan thanks all those who had supported him for the two years he has been here.

Charlie’s Place is slated to close its doors on Friday, May 25th after its final shift at 2:30 p.m.