Graves of Selma figures to be restored Saturday 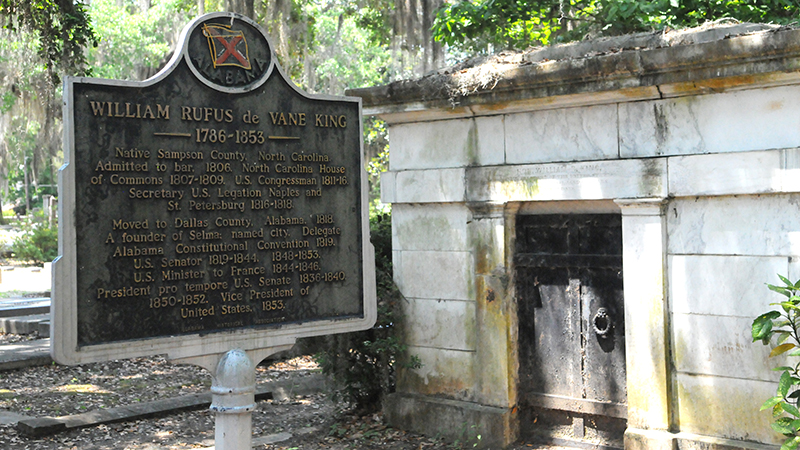 The Selma Old Town Association is pitching in to do their part in keeping the history and icons of Selma alive through the restoration of the graves of William Rufus de Vane King and Benjamin Sterling Turner.

Both men played an integral role in the shaping of Alabama history and have a political career that Selma can be proud of.

William Rufus King is the highest ranking United States official from Alabama in the state’s history, serving as Vice President under the administration of President Franklin Pierce. He is responsible for naming the city of Selma, partaking in the writing of Alabama’s state constitution and serving as an ambassador to nations such as Italy, Russia and France.

Benjamin Sterling Turner became the first African-American from Alabama to be elected to the House of Representatives. This came during the Reconstruction Era of American history, where tensions were high between the victorious Union and the crushed rebel Confederacy.

Turner was a successful figure at bridging the gap between hated parties. Although he was a former slave, he fought for amnesty for members of the former Confederacy.

He did this understanding that America needed to bind together to make things better. Additionally, he was integral to the preservation of the St. James Hotel. While his owner was away fighting in the Civil War, he made sure Turner was the one in charge of the maintenance.

Turner was also well-educated. From an early age, everybody took an interest in Turner because of his wits. He was educated alongside his master’s kids. It was this education combined with his wits and dedication that propelled him to the United States House of Representatives.

Both of these men are buried in the Live Oak Cemetery located off of Dallas Avenue. The cemetery is often noted for its beauty and scenic trails along with historical tombstones.
However, the tombstones need some touching up. In order to respect the memories of King and Turner, the Old Town Association is ready to make them new and improved.

“We believe that Live Oak is one of the prettiest cemeteries in the Southeast, so we want to spruce it up,” Dr. Gery Anderson, member of the Old Town Association, said. “This is the first time the association has done this.”

With this being the first time the members of the association have restored anyone’s grave, they wanted to make sure it is done right for people who represented Selma in a positive way.

For David Tipmore, current president of the Old Town Association, it is about highlighting people who shined a good light on Selma. The belief is restoring the grave will help bring back their memories.

“After a discussion at a recent meeting, our members thought it would be clearly within our mission to clean up these grave sites for any number of reasons: their historic significance, their importance to the looming bicentennial, and as a statement about the need for stewardship of city landmarks,” Tipmore said.

“We chose these two sites because they are so representative of the complete history of our town.”

The restoration is taking place this Saturday at 9 a.m. For more information about the Live Oak Cemetery, visit their website at http://www.civilwaralbum.com/misc15/selma_cem1.htm.