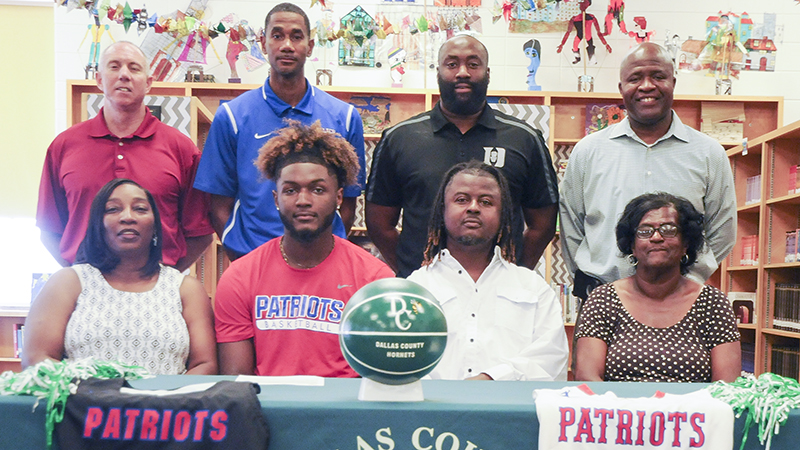 Furlow kept his signing day short and went straight to signing his name after he was seated between his parents and grandmother.

Furlow and his family were excited to learn that he had earned a scholarship to continue his education beyond DCHS. His parents were encouraged to know that not only was his tuition covered, but they would also be able to attend his games.

“We’re excited, and I just want the best for him,” LaDarius’ mother Priscilla Furlow said. “We’re just waiting for him to excel, do his best and get the highest education he can. We’re really excited for him.”

In his senior season with the Hornets, LaDarius averaged 11 points and six rebounds per game. His size gave him the height advantage in nearly every game for the Hornets. If the shots weren’t falling, LaDarius could be depended on to clean up the boards and work deep inside the paint.

“In my first year being the head coach, this is my first scholarship player,” Nix said. “I’m excited for him, and for what his future is going to become.”

The Hornets season ended in a one-point, double-overtime loss in the sub-regionals, but LaDarius was a big reason the team got that far.

“Furlow was a major contributor to our team,” Nix said. “I watched him from being a seventh-grade puppy to growing into a senior big dog this year. I think Wallace is going to get an excellent guy that they can build on.”

The WCCS Patriots weren’t the only team interested in bringing Furlow to their program.

He had multiple junior college offers from schools like Bevill State, Southern Union and Enterprise State. He also caught the interest of NCAA Division I and II programs like Auburn-Montgomery, Alabama A&M and University of North Alabama.

Despite the multiple options available to him, LaDarius decided it was in his best interest to stick close to home and join the Patriots.

“WCCS seemed like they wanted me and gave me a chance, so I wanted to take their offer,” he said. “And I get to play at home.”

Signing LaDarius came at the perfect time for the Patriots, since they are losing sophomore centers Cornelius Gibbs and Cortez Gibbs to graduation.

“We’re excited to bring in a local guy who has played in a program right here in Selma,” WCCS head basketball coach Duane Evans said. “We think he has a great amount of potential. He has a huge ceiling, and we’re just looking forward to getting him in the gym, starting early with him this summer and moving forward.”

Furlow is the same height as the Gibbs brothers, so he’ll have an opportunity to prove he can fill their spot on the roster.

“Furlow has a big body and good size. In our conference, his size, ability and the way he maneuvers on the floor is going to be a huge plus for us on both ends of the basketball floor,” Evans said. “He has a great opportunity to come in and impact the program immediately for the simple fact that we’re losing both of the guys that play in front of him. That’s one of the biggest things we’re looking forward to.”