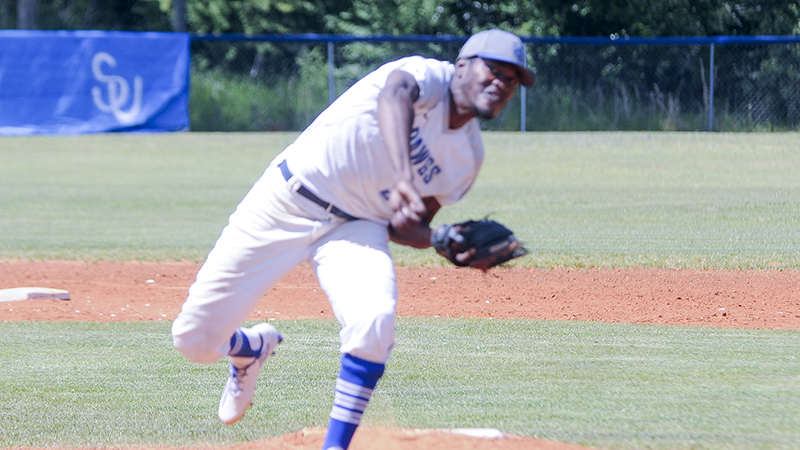 Derrick Sylve pitching at the Bulldogs home field versus Stillman College earlier this season. In game one of the USCAA Small College World Series, Sylve struck out 10 hitters in the 5-2 win over College of St. Jospeh’s VT.

Monday morning, they defeated the two-time defending champion College of St. Joseph’s Vermont 5-2 in the first game of the tournament.

“We wanted to start fast and play with a lot of confidence,” Selma U head baseball coach Adrian Holloway said. “Our plan was to set the tempo and get at least one or two across in the first inning.”

The No. 10 seed Bulldogs jumped out to an early lead in the top of the first inning behind a two out, two-run home run by first-team All-American and USCAA home run leader Marcus Hardy.

“When he hit that one it was a sigh of relief, because I knew that would be key to setting the tone for the guys,” Holloway said. “When the ball hit the bat, I just felt at ease. I knew the guys were ready to play today.”

Selma U picked up three more runs in the second inning to give starting pitcher Derrick Sylve a 5-run lead.

“Derrick put on a gutsy performance,” Holloway said. “He got into some tough spots, but he got out of them. The fastball really affected them a lot today, and he kept them off-balance with good control of his breaking stuff.”

Sylve was able to pitch with a lead from the moment he took the mound in the bottom of the first inning. He was able to settle into the game quickly and hold College of St. Joseph’s VT to just two runs on two hits.

“It felt like we did some big things today,” Sylve said. “I just had the lead to pitch with, and these boys have been fighting with me all season. I just had to really go after them, and give our team a chance to win.”

The run support was helpful, but Sylve’s biggest supporter, Dawn Moore, caught a flight from Atlanta to Pittsburgh, then drove to Dubois to watch her son pitch for the first time.

“She showed up to the game and sort of surprised him,” Holloway said. “I knew it was going to be a special day for him.” 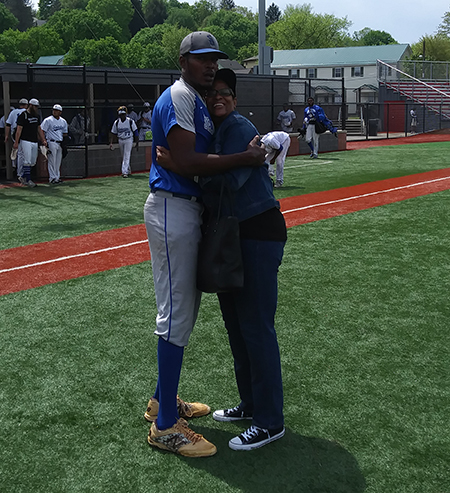 Selma University pitcher Derrick Sylve gets a hug from his mother Dawn Moore after getting the win Monday at the USCAA World Series. It was the first time Moore had seen her son pitch in college.

Moore got her belated Mother’s Day hug after Sylve struck out the side in the bottom of the seventh to end the game.

“Oh man, that was a great experience for me,” he said. “My mom is the only one close to me. She’s really cared for me over these years, so to be able to get game one of the World Series and for her to be there, I was really happy about that.”

Moore has only seen her son’s college games on film or through on-line web cast, so seeing her in the stands provided an intangible boost for Sylve.

“In person, she never really got the chance to see me play,” he said. “Now that I’ve got the chance to start and I was blessed with the opportunity to start the first game, she found her way up to Pennsylvania to cheer us on. It really picked me up and turned me up to a different level to know that my mom was there, and I had to perform for her.”

The Bulldogs have battled to earn their spot in the playoffs all season long. After a sluggish start to the season and just making the tournament with a 13-12 record, the team is focused on keeping their season alive a game at a time.

“I like the way we stayed focused throughout the game, because sometimes we get leads and then we ease up on people,” Holloway said. “We’ve given away some games like that this year, so I was glad to see us close out a game strong. Even though are bats got a little quiet at the end, our pitching remained strong, our defense remained solid and we were able to finish a good game.”

The win keeps the Bulldogs out of the loser bracket, and advances the team to a matchup against the No. 2 seed Apprentice School. The game is scheduled for 9 p.m. Monday, but will be moved to Tuesday morning if the earlier games do not finish on time.

“I’m proud of my guys for hanging in there and getting the job done,” Holloway said.

In addition to their hard work, the Bulldogs are grateful to its fans, supporters and hometown for assisting with the last-minute donations to help them make the trip to Pennsylvania.

The USCAA World Series is just under 1,000 miles away from the Bulldogs home field, and supporters of the team were able to help provide the funds necessary in just one weekend.

“We had some generous donations from people in the community. The people in Selma really came through for us and helped us out,” Holloway said. “We appreciate all the donations from everybody all over the country who donated to us. Without them, this trip may not have been possible.”

“Michael Johnson made a very generous donation to us, and pretty much solidified us being good to go,” Holloway said. “Michael Johnson is a great guy who represents Selma very well. He’s constantly doing things for the city of Selma and Dallas County, and we’re very grateful for it.”

The USCAA Small College World Series is a double elimination tournament, and the Bulldogs are a minimum five games away from the title game. Despite being the lowest seed, the Bulldogs are determined to make it to the championship game.