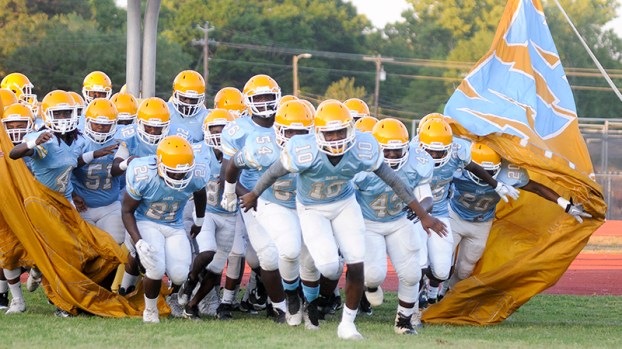 elma High’s football team charges onto the field for its spring game matchup with Carver-Montgomery Friday night at Memorial Stadium.

The Selma High Saints trailed Carver-Montgomery 20-13 with only a few minutes left in the fourth quarter of its spring game at Memorial Stadium Friday night.

The first-team offense had been pulled from the game after the last series before the fourth quarter, but the Saints were still pushing to stay in the ball game.

Back-up quarterback Christopher Gardner marched his team down the field with the assistance of big plays by running back Nicholas Parnell.

The Saints managed to get the ball down to Carver’s one-yard line with 45 seconds left in the game, but were denied entry into the endzone as the time ticked away.

The second-team defense managed to get a safety with 4.9 seconds left in the game, but left the team five points shy of a tie.

Carver escaped with a 20-15 win in the spring exhibition between two Class 6A schools.

“Carver is a good football team that always has talent, so it’s a good gauge for us,” Selma head coach Christopher Raymond said. “I think we competed well. We started a little late, but we have the ability to play with anybody.”

The Saints struggled early in the game on both sides of the ball.

Starting quarterback Tyreshon Freeman and running back Amarian Molette fumbled the hand-off on the second play of the game, which led to a one-play touchdown drive by Carver.

The offense lost yardage on its next drive and were forced to punt. The defense then yielded another touchdown drive, and the Saints were already down 13-0 with 6:59 remaining in the first quarter.

Early mistakes cost Selma field position and scoring opportunities. Freeman fumbled the ball later in the first quarter and threw two interceptions, but the defense was able to prevent Carver from capitalizing.

On a brighter note, the Saints were able to find some rhythm before half time. 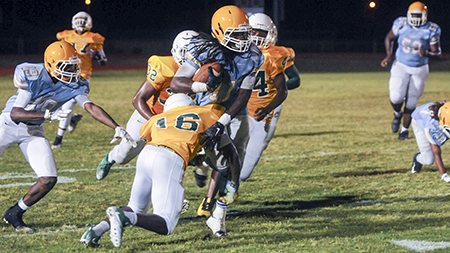 Selma High running back Nicholas Parnell broke several tackles on a 15-yard run in the fourth quarter against Carver-Montgomery.

Freeman threw a 33-yard touchdown pass over the middle and just over the defensive back to Parnell on a fourth down play. The Saints went into half-time trailing 20-6.

“I saw Parnell coming across, and I just trusted that he would make the play,” Freeman said.

Freeman threw his second touchdown of the game on a 29-yard pass to Ja-kobe Robinson late in the third quarter to cut the lead to 20-13.

“I started getting comfortable in the pocket, and made the throws I needed to make,” Freeman said.

Carver’s effective running game was shut down, and the Saints defense started flying to the football. Saints linebacker Jovarsva Sims had two sacks and a fumble recovery as he consistently got into Carver’s backfield.

“After I made my first couple sacks, I felt like the defense woke up,” Sims said. “It felt like if I go hard, then they’ll go hard too. The momentum changed. We played harder as a team, came together and got the job done.”

Even after Raymond pulled his starters going into the fourth quarter, the energy of the team had changed. In a game that wouldn’t affect their win-loss record, the Saints players were still hungry for a win. Ultimately, the score meant nothing, But the Saints got the chance to see where they were after only a few weeks of spring practice.

“I’m still excited, and I know what I need to know now,” Raymond said. “As a head coach, I know where we need to go.”

The McRae-Gaines Learning Center celebrated its 40th anniversary Thursday evening at the Pride of Alabama Elks Lodge, and they had... read more