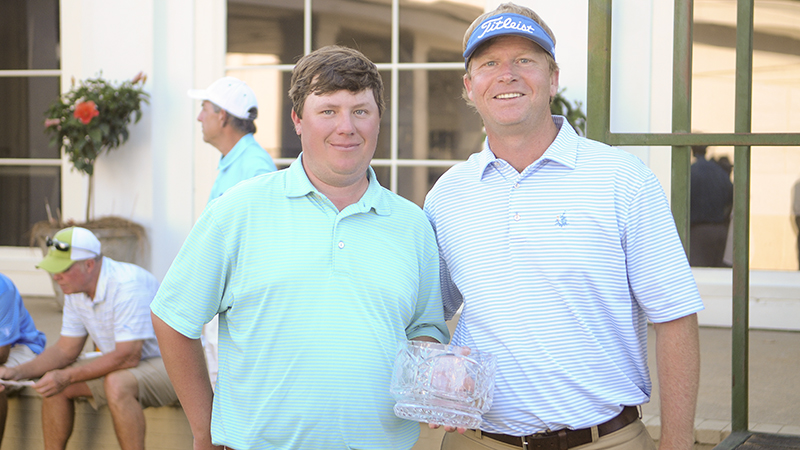 Selma Men’s Invitational champion Tripp Owens (left) accepts his trophy from Andy Stewart . Owens shot a 70 on day one and a 69 on day two to finish the tournament with a score of 139.

After a long morning of golf in the 90-degree heat at the Selma Country Club, the golfers mingled over sliders and beer as they waited for the final results to be posted on the leader board for the 2018 Selma Men’s Invitational tournament.

The two-day tournament had a packed field of 60 golfers competing for the championship prize.

“It went great,” Selma Country Club golf pro Tommy Burns said. “It was the first time we’ve had a tournament instead of a three day, but it still had some of the edge to it.”

This year marked the 90th anniversary of the tournament, and this year’s winner was Tripp Owens from Brewton.

“It feels great,” he said. “I hit the ball really well, and I’m just glad to come out on top.”

Brewton shot a 70 on Friday, and finished play Saturday with a 69 to bring his tournament score to a 139.

“I didn’t putt particularly well the entire weekend, but I hit the balls as well as I ever have,” he said. “If you look at the top names on the board, there’s some really good players up there. Not playing in the final group took a little pressure off, so I could just go out there and post a number and not worry about what the lead was.”

He had played the course several times and competed in the Selma Men’s Invitational before, but this was his first time finishing in first-place.

“I’ve played this tournament the past ten years, and I’ve never come close to winning,” he said. “It was just one of those weeks. I made a one long put on the last hole, and that helped.”

The competition level was high, and Burns felt that the golfers had put up some of the best scores this tournament has seen.

“I think this year’s players did better than in past years,” he said. “In the past, I think 145 would’ve won the prize, but it took 143 this year and that’s just one over par.”