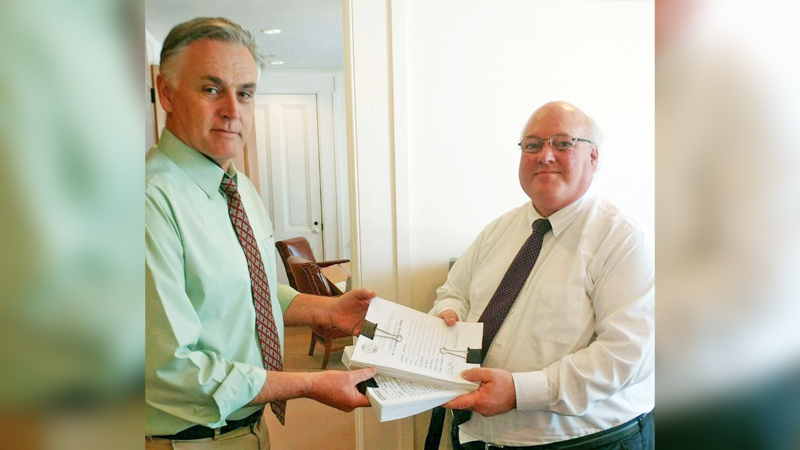 Mark Story, who is running as an independent candidate for Senate District 23, hands Edward Packard from the Secretary of State’s office his petition. (Submitted Photo)

Less than a month after announcing his intentions to run for Alabama Senate District 23 as an independent candidate, Mark Story has submitted more than the required number of signatures to be added to the ballot.

According to a news release from Story’s campaign, 1,650 signatures were submitted to the Alabama Secretary of State’s Office. The deadline is June 5, the same day as the primary election.

“The Mark Story for Senate District 23 campaign is pleased to announce that in just over three weeks the signatures of 1,650 Senate District 23 registered voters have been collected and presented to Mr. Edward Packard, administrator of elections of the office of the Secretary of State,” Story’s campaign said in a release.

“Mark Story has now met all the requirements to be placed on the Nov. 6 general election ballot as an independent candidate for the office of Senate District 23.”

John Bennett, deputy chief of staff and director of communications for the Alabama Secretary of State’s Office, confirmed Wednesday they have received the signatures.

“We have received the signatures and are following the standard process to verify those signatures that were on the form to be verified that they are all eligible, registered voters,” Bennett said.

The verification process has not been completed yet.

“It’s an extensive process, but we’re going as fast as we can,” Bennett said, adding they will be counted in time for Story to get more signatures turned in if needed.

In order for an independent candidate to get on the ballot, the candidate must get a certain number of signatures on a petition.

“The number of qualified electors signing the petition shall equal or exceed three percent of the qualified electors who cast ballots for the office of Governor in the last general election for the state, county, district, or other political subdivision in which the candidate seeks to qualify,” states Alabama Code Section 17-9-3.

According to Story’s campaign, the required number of signatures he needed was 1,263. His total exceeded that. His campaign plans to continue collecting signatures in the case of any signature disqualifications or challenges.

If the needed number of signatures is verified, Story will be added to the ballot for the general election in November.

Story, a member of the Dallas County Board of Education, announced he was running for District 23 in early April.

Sanders has held the District 23 seat for 35 years.

Phone calls to Story for comment Friday and Saturday were not returned.