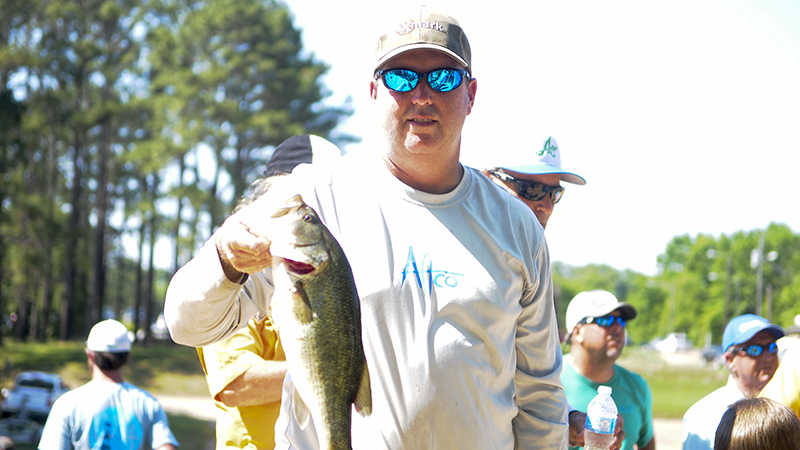 Kevin Jones lifts his 4.11 pound Big Fish winner at the Sav-A-Life Bass Tournament Saturday afternoon. He and his partner Torrey Jones won the tournament with a total weight of 17.75 pounds.

The Selma City Marina was crowded with fishing boats Saturday afternoon, as competitive anglers brought their five best bass to the weigh-in table at the 2018 Sav-A-Life Bass Tournament.

This year’s tournament its largest pool of competitors with 78 fishermen split into teams of two. At day break, 39 boats went out onto the Alabama River to fish out as many big bass as they could to compete for the grand prize of $3,000.

“We put this tournament on for the Safe Harbor Women’s Medical Clinic,” tournament director Steve Craig said. “I’m sure the guys fishing would’ve preferred 10-15 degrees cooler weather, but it’s kind of like a football game. When it’s time to play, you’ve got to play.”

Kevin Jones and Torrey Jones were the 2018 champions. They brought five bass to the scales that weighed in at 17.75 pounds.

“We were on a shallow water pattern, and we flipped a jig and a swimming jig all morning long,” Torrey said. “We didn’t start catching our good fish until about mid-morning.”

The Jones team also won the Big Fish prize of $110 with a tournament-best 4.11-pound bass.

The Jones’ covered more than 60 miles of the Alabama River in 90-degree weather to find the best spots for lurking fish.

“We went way down the river, and got into some back water,” Torrey said. “We had done some pre-fishing earlier this week, and thought our chances were better fishing for largemouth. We just stuck with our plan, and actually doubled back to fish some areas we had already fished earlier in the morning.”

The Jones’ are veterans on the Alabama River that enjoy competing in regional bass tournaments.

“I’ve been fishing this river competitively for 20 years,” Torrey said. “I just knew my chances of winning a tournament of this caliber would be better down that way fishing shallow waters for largemouth. It’s something I enjoy doing.”

Even though the fishermen were able to show their day’s work at the weigh-in table, it was a tough day for fishing.

As the top-finishing anglers took their polygraph tests for confirmation, Craig raffled off door prizes and gift cards to those who came out to support the reason for the tournament.

Safe Harbor Women’s Medical Clinic, is a crisis pregnancy center that offers resources and classes to women seeking help through their pregnancies.

The center receives neither state nor federal funding, so it relies on donations and fundraisers like the bass tournament.

“We rely solely on individual support and churches,” Safe Harbor executive director Jennifer Dobbs said. “But that’s not enough to meet our monthly needs, so we have to do fundraisers. The bass tournament is one of our major fundraisers that we do to keep us going.”

The money raised allows the center to provide counseling, resources and essential infant care items for women in need.

“All of our services are free,” Dobbs said. “We try to help when women are scared, or not sure what to do when they’re pregnant.”

The popularity of the bass tournament not only brings money to the center, but it also spreads awareness about the needs of the center.

The parking lot packed with pick-up trucks and the crowd around the results board was a good sign for the success of the fundraiser.

“I think it was a great turnout today,” Dobbs said. “We had 39 boats, which is the most we’ve ever had.”

Selma High and Carver-Montgomery meet for spring game at…