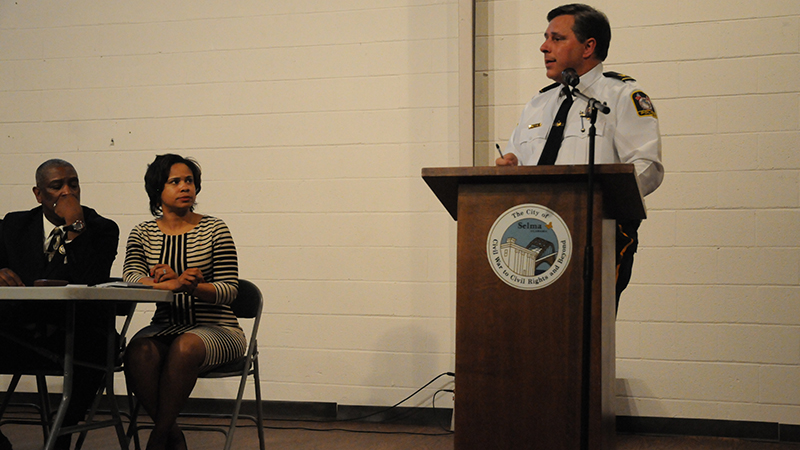 Answers were in high demand at the city’s public safety meeting Thursday night, as multiple Selma officials stepped up to the microphone to address residents’ concerns regarding the state of their town.

Following public interest over the rising crime rate in Selma, the safety hearing was called to clear up these concerns between the residents, former residents and government officials.

With all of these men and women gathered into one place, the public took notice and filled out almost all the seats of the reception center. The questions poured in and did not stop coming for the entirety of the program.

The residents of Selma came prepared, wanting to know more about a large number of issues. The main one being the concern over crime.

Answering the large majority of questions, Collier explained that his team is doing the best they can with what they have, and some ways the community could help them out. With just above 50 officers for a town of 19,000, they want to be readily available when needed.

“Fifty percent of the calls we receive are related to alarms. Ninety-five percent of these calls are false alarms,” Collier explained. “We need a fine for false alarms. I know other cities institute a fine after it happens five or six times. If we cut down on the number of false calls, it will allow our officers to respond to more actual calls.”

Collier broke down the numbers for the residents to give them the reality of the situation.

“We have had more narcotics cases since October than in the past three years,” Collier said. “And are we getting all of them? Not even close.”

“We had no narcotics unit here when I first arrived, as hard as that is to believe.”

Along with officer availability and drug crimes, the residents were curious about the high level of violent crimes and gun activity. While Collier acknowledged the city has a long way to go, he also noted that last year the Selma police solved 70 percent of homicides, compared to just 14 percent from the previous year.

The number of homicides solved may be improving, but he still wanted to go into detail over why drug and violent crimes exist as they do currently in Selma.

According to Collier, much of the crime is poverty-driven or related to gang violence, and he needs help from the community in order to curb it.

“Much of the shooting is in retaliation. An 18, 19-year-old kid is taking it upon himself to shoot into a family member’s home that had nothing to do with what happened. It is unacceptable,” Collier said. “We need help from the community. This starts in the homes.”

“We need to teach them there is a value on human life.”

In addition to residents’ concerns over crime, Selma Fire Chief Toney Stephens explained a new program he wishes to implement which he believes could make a difference in the town and in the lives of Selma youth.

This program would target young men and women in Selma to enter a training program to become a policeman or fire fighter in due time. The idea is to intervene in the lives of these young people to help prevent them from turning to drug or gang violence. It also would give the people what they want: more first responders from Selma.

“You all will get some of your own home-grown men and women from Selma,” Stephens said.
Other issues addressed included the concern with residents getting away with traffic violations. Collier responded that he has two traffic officers for 68 accidents occurring last month alone.

The audience also inquired into whether any officers were on administrative leave relating to drug offenses. Collier responded with no, but that other law enforcement agencies are investigating potential questionable behavior.