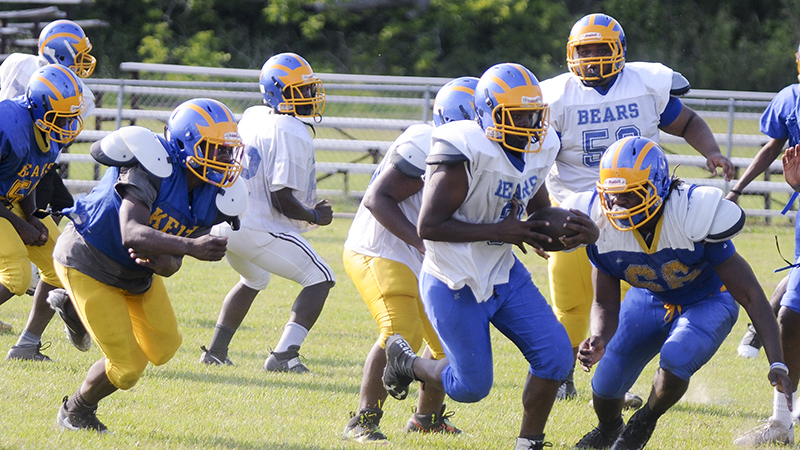 The Keith High School Bears football team is in their final week of spring practice, and the 90-degree heat Wednesday afternoon didn’t keep the team from going at it in full pads.

The Bears won’t have a spring game this year, but head coach Harry Crum is still using his allotted spring practice days to evaluate his team.

“I’m going to do the evaluation by where the kids were when they started versus where they are at this point,” he said.

The Bears went 6-5 last season, and made it to the Class 2A playoffs.

Turnover in high school sports is a constant with each graduating class and upcoming new students, but the Bears will have more holes to fill than most. Keith’s 2017 football team had 22 seniors.

“That’s a lot of seniors for a high school in 5A, so when you look at us in 2A, we have some replacing to do,” Crum said. “We’ve been doing a lot of teaching and going slow with the younger kids. I think we’ll have some kids that will hopefully be ready by game one.”

Replacing players like Jeashan Black, Trashaud Jackson and Ty’Quarius Murray will be tough, but the Bears do still have experienced players to help steer the team.

Crum is confident in his linebacker corps of Levi Thomas and Mark Young. Jared Edwards already has two-years of experience as the starting quarterback under his belt, and the team’s 2017 interception leader Kendarius Perry will also be back for the Bears.

“We have some kids that we already know are solid performers,” Crum said. “We have a nucleus to work with, but we just have to fill in those gaps pretty quick.”

The Bears run a Wing-T offense, which can be a dangerous weapon if utilized properly. Between the options, counters and misdirection plays, it can be difficult for defenses to keep track of who has the ball.

However, it does require a lot of attention to detail and the whole offense must be synchronized for it to be effective. Crum guided the offense through each drive. He pointed out missed assignments, and walked the offense back through plays that got blown up by the defense.

“The Wing-T is a staple of ours,” Crum said. “We’re going play by play, and walking the players through it every single day until they get it.”

The offense did have a few highlights of their own to get excited about. A few big runs made it to the second level of the defense, and Edwards threw 40-yard touchdown pass down the sideline that the receiver caught while covered by two defensive backs.

Ultimately, the spring period is about getting back to the fundamentals since the team hasn’t had a practice or game since the 2017 season ended. Crum has been working tackling drills on the pop-up dummy day in and day out.

“We work on form every day,” he said. “We teach the kids to get their feet spread, knees bent, tail down, back straight, head and shoulders up and seeing what they hit.”

Crum said that it’s been a successful spring period for his team, and he looks to end the week with everyone healthy. The practice period ends this week, so the Bears won’t be back on the football field again until the fall. The team’s season opener is set for Friday, August 24 at home against Billingsley.