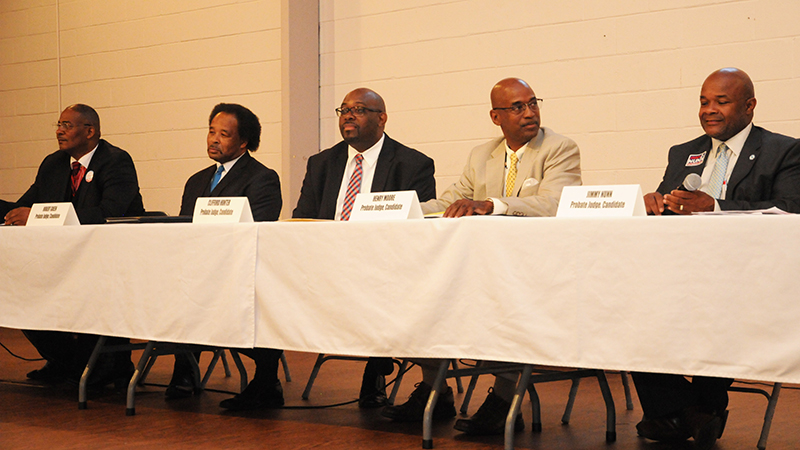 Interested members of the public and multiple local candidates gathered inside the George P. Evans Center to present their ideas to the audience as well as answer their questions. The event was hosted by the Dallas County Democratic Executive Committee.

With growing community interest as the June 5 election approaches, the event was moved to the Evans Building, with the previous forum for other positions taking place at the Walton Performing Arts Center. Moderating the event was judge Collins Pettaway Jr. and Candace Pettaway. Wanting to ask a vast myriad of questions, they wanted to slightly shorten the time each candidate received for opening statements, closing statements and responses.

The purpose of this forum was not to debate one another, but to allow productive discussion to give the audience accurate and appropriate information.

First up were the two candidates for coroner, featuring challenger Martis Black and incumbent Alan Dailey.

Black has decades of experience working with schools and organizations in the mental health field. Dailey has served as the coroner for Dallas County for 14 years.

This was the first forum that featured the coroner candidates, with the previous DCDEC forum and Coalition of Concerned Families.

A position that is often not an individual’s primary job, it was asked of each candidate to describe their ability and motivation to balance the coroner job with their current job.
Black said his background in helping kids all over the county has prepared him for the readiness this job requires.

“I am based and have work all over Dallas County. Whenever I receive the phone call, I would be able to get there in a hurry no problem.” Black said. “People come to me for help.”

For Dailey, he believes his track record speaks for itself. He said that he loves the job.

“You have to be a dedicated individual for this job. It is tough when it is somebody who has a loved one they have lost,” Dailey said. “I do whatever it takes as long as it takes.”

For circuit clerk, challenger Lynnethia Robinson spoke alongside incumbent Christmas Green on the stage. With both candidates speaking at a forum previously, they both went into the forum with a better understanding of each other. However, this mutual understanding was based out of respect. As Robinson stated during the forum, she and Green have some of the same ideas and are both people who care about others.

Both women have experience as a clerk and both have something they profess to be immensely proud of.

For Green, she is proud of her hard work in earning her degrees.

“Degrees are important, and I worked hard and I am proud of those,” Green said. “You want the most qualified candidate, and I am not working for a penny more than anyone else.”
For Robinson, her sense of pride comes from her ability to earn her keep in her profession.

“I have worked for multiple clerks office, including Dallas County. I started off as one of the lowest clerks you can be, and now I am the supervisor of the state probation office,” Robinson said. “I am proud of starting at the bottom and proud of my hard work.”

For probate judge of Dallas County, five of the six candidates were in attendance: Jimmy Nunn, Robert Green, Clifford Hunter, Franklin Fortier and Henry Moore Jr. Candidate Nick Switzer told the Times-Journal was unable to attend the forum due to previous business commitments that were necessary for him to attend.

The audience sent in over 20 questions to ask the candidates. With such a high volume, Judge Pettaway asked as many as the time allowed him. Some of the questions asked included the state of the city and county’s infrastructure, the ability to budget limited funds and the ability to work with the city.

Nunn, Selma city attorney, wanted the audience to know he has large involvement working with the city and county.

Green emphasized his time as police chief of Northport and of Selma. He refers to himself as a budgetary man who is fiscally responsible.

Hunter has been helping people in Employment Services for decades, and says his track record shows his effectiveness.

Fortier, with 30 years as an educator, believes he is the man who can help the children and residents of the county.

Moore has run a funeral home for 22 years, believing he can combine his business savvy with a caring tone.

Muhammad named Boy of the Year