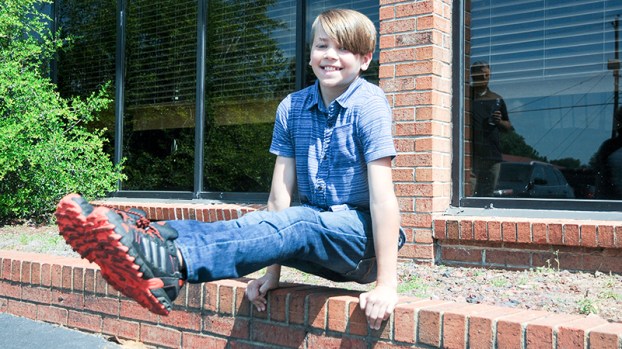 George Stevens, 12, performs an L hold outside his family’s restaurant. George competed against the top gymnasts in the Southeast this past weekend at the regional championships in Chattanooga, Tennessee.

Dedicated gymnast competes against the best at regionals

George Stevens, a 12-year old gymnast from Valley Grande, finally got his chance to perform at the Region VIII Men’s Compulsory Championships at the Chattanooga Convention Center in Chattanooga, Tennessee this past weekend.

The Stevens family are big Alabama Crimson Tide fans, and they have a tradition of listening to “Eye of the Tiger” in the car on the way to each gymnastics competition.

“It’s like something we always do,” George said. “Just for me, it gets my sister nervous.”

Before each competition, George takes a moment to mentally prepare himself for his upcoming competition.

“Before I get there, I close my eyes and visualize all my routines,” he said. “That helps me remember them. Until you’re at the meet and they’re about to announce your name, you don’t think about it until you are there.”

George has made it to the state meet each year he’s competed. He had a strong enough score last year when he was in Level 4 competition, but the regional championships didn’t include Level 4’s until after he moved up to Level 5 competition.

“The year I moved up from Level 4 to Level 5, they let Level 4’s move up to regionals,” he said. “We looked back at my old scores, and I would have qualified for regionals.”

Despite being disappointed that a technicality prevented him from advancing, Stevens kept his focus on what he could control and made sure he qualified for regionals in his first year as a Level 5 gymnast.

Stevens is a member of the Bama Bounders boys gymnastics team based out of Tuscaloosa, where he has trained with gym leader and head boys coach Erica Halle and boys coach Brian Binion-McCoy.

“I’ve been with George for four years now, and he’s just a joy to work with,” Halle said. “He’s very supportive of his team members, and he works extremely hard. You give him a challenge, and he’ll do more. He really earned his spot to qualify to regionals.”

His parents, Chris and Tracy Stevens, alternate making the hour and a half drive back-and-forth to Tuscaloosa three times a week so George can endure intense three-hour long gymnastics practices.

In order to make it back to regionals this season, George had to finish in the top 18 out of more than 40 kids at the Alabama state meet in Huntsville. He took first place in floor exercises at state, and his eleventh-place finish qualified him to advance to the regionals in Tennessee.

“George was super excited to qualify because they only take a certain percentage of the kids from each state to the regional meet,” Tracy said.

The big stage may get to some athletes, but George treats each meet the same. There’s no high-pressure moment for him because he trusts his training and is confident in his ability to execute his routines in any event.

“I think of all meets as the same. I know the qualifications are different, but I just think of it as another meet. That helps me keep calm,” he said. “I’ve been practicing on more days than I usually have for regionals.”

At regionals, George was judged on six events, including the rings, vault, mushroom (pommel horse for young gymnasts), high bar, floor and parallel bars. He didn’t bother looking at his scores during regionals, but simply focused on the task at hand.

“This was actually one of my best meets ever,” he said. “My routines were really good.”

George may have not been paying attention to his scores, but his mother was for him.

“He really performed well in all his routines,” she said. “His highest score was on the mushroom.”

The regional competition brings in the top gymnasts from all around the Southeast. Athletes from Georgia, Tennessee, Florida, Mississippi, North Carolina and South Carolina brought their top talent to compete.

“I like good competition,” George said. “In some sports that I’ve done, I’ve gotten better because people were better than me, and I had to strive to get better than them.”

Not only was the competition stiffer, but the judges at regionals were more strict than those at the state championships.

“At some meets, judges will take off two-tenths or four-tenths, but at regionals they just take off as many as they can,” George said. “I’ve been told that the judges were stricter before, so I was kind of expecting it.”

Boys gymnastics isn’t as popular in Alabama as it is in other states, according to Halle, so the 18 that made it from the state competition was nothing compared to the more than 45 athletes from Florida.

George wasn’t able to bring back a medal, but he did have his best performance of the season. He earned his highest score on the mushroom and completed one of his best floor routines of the season.

He and coach Halle were both proud of his showing at regionals.

“I think he did one of his best meets,” Halle said. “The thing about George is that he’s a very clean gymnast. He really puts the execution into it with his pointed toes and straight legs. It just makes his gymnastics very beautiful to watch.”

George started practicing gymnastics when he was four-years old with Callen Free in Selma. The local YMCA nor the city of Selma has a gymnastics program, so his exposure to the sport came from watching his older sister, Ruth Stevens.

As he was progressing, George almost quit gymnastics altogether because he was one of only a few boys doing the sport.

“He decided that he didn’t like being with all the girls and wanted to quit,” Tracy said.

It was Callen who encouraged Tracy to find George a team to be a part of, and that is what led the Stevens family to the Bama Bounders in Tuscaloosa.

“If they didn’t love gymnastics, then they would not be driving the hour and a half four days a week for him and his sister to train and compete,” Halle said. “George is very, very dedicated. He just cares so much about his path in the sport, and I think he understands the sacrifice. I think he really respects his parents for that.”

The family has grown accustomed to making sacrifices in order for George and his siblings to participate in their numerous activities, hobbies and interests.

The family has been running the Golden Ranch Bar-B-Q and Grill in Selma for the past 30 years, and gymnastics, theater practice and everything else the family gets into doesn’t prevent the restaurant from opening at 10:30 a.m. every Monday through Saturday in Selma.

“It’s a commitment for the parents and the kids,” Chris said. “We drive to Tuscaloosa four times a week for gymnastics, but the kids have gotten a great benefit from it. They learn about hard work, how to stick with a sport and discipline.”

During his off days, George helps out at the restaurant where he can in order to help the family.

“On Wednesday’s, I cater to our church, and on Friday’s I work in the back and wash dishes,” George said. “Those are the only days I’m not doing something.”

Just to get to regionals, Taylor, who was in Illinois with George’s other sister Grace Stevens, flew into Birmingham to meet Chris and George. George hopped in the car with his mother to continue on to Chattanooga, while Chris headed back to Selma.

George enjoyed a full day in Chattanooga while he was there for his competition. His meet didn’t begin until 2:30 p.m. this past Friday, so he was able to check out the Creative Discovery Museum in the morning. Once regionals were over, George still had the energy to go rock-climbing to wrap up his day. George is already focused on moving up to Level 6 for next season and plans on making another run to regionals as well.

When a football college recruiter shows up at a high school, it brings a tangible experience to the student athletes... read more