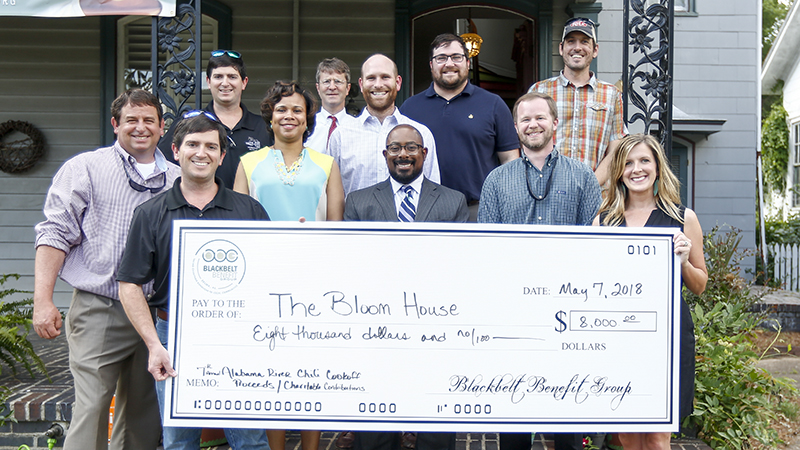 The chili was aplenty last month during the seventh annual Alabama River Chili Cookoff, and so were the proceeds.
The Blackbelt Benefit Group, now in charge of the Selma tradition, donated $8,000 to the Bloom House Monday afternoon.
“It’s kind of a realization of one our purposes for being a group here in Selma. Being able to give a sizable donation back to an involved organization such as Bloom House, where we know they’re having a direct impact on the community, is rewarding,” said Josh Wilkerson, president of the Blackbelt Benefit Group.
“Seeing the fruits of our labor and all of those who support us ­­–– sponsors and volunteers.
It’s nice to see.”
Each year, the cook off benefits a nonprofit in Selma, and this year’s nonprofit was the Bloom House, which is dedicated to advocating and serving children in the foster care system.
“It’s so exciting to have the support of the community and to just raise awareness on this issue of foster care and the need for the community to just come behind these children and support them during this time,” said Kristen Jones, founder of the Bloom House.
Wilkerson said there is no doubt the Bloom House will put the money to good use.
“I have no doubt they’ll be good stewards of this contribution. I know that what they’re doing is important, and I hope that some of the far-fetched dreams that they have will be possible now,” Wilkerson said. “Maybe some things that they thought were years down the road will come to fruition much sooner.”
Jones said the $8,000 donation will help the Bloom House reach more children in foster care.
“With this money, we can reach more children with some programming, more art classes, cooking classes and just building relationships with them and letting them know that we are a family to them,” Jones said.
“We just kicked off the summer with a little event and gave out swimsuits and asked the kids what they want to do this summer. Some of them are getting ready to go to camp, so that’s exciting.”
The Alabama River Chili Cookoff was founded by Selma-Dallas County Leadership Class XVIII as a class project. After seven years of putting on the event, they are passing it down to the Blackbelt Benefit Group.
Already excited for next year’s cook off, Wilkerson said the group is pleased with this year’s turnout.
“With this having been the first year of our involvement as far as helping promote and organize the event, it’s encouraging because we did have big shoes to fill,” Wilkerson said.
“We’re encouraged and excited that with their help it was a success. We’re looking forward to next year and hopefully bigger and better so that we can continue to give back.”