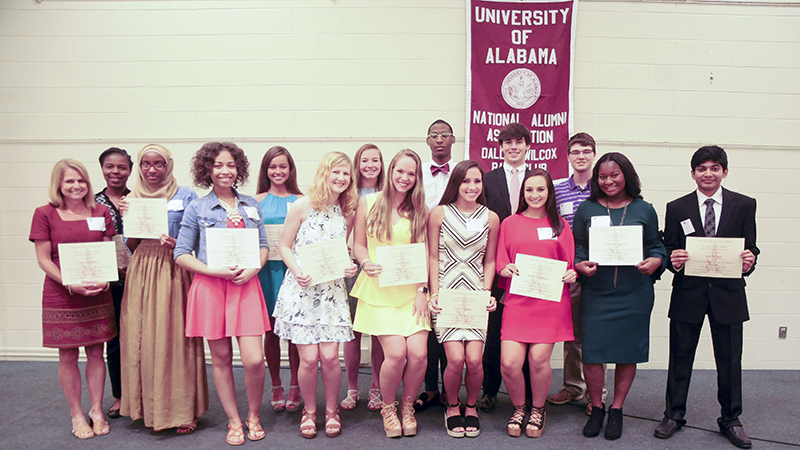 The Dallas Wilcox Bama Club, a chapter of The University of Alabama National Alumni Association, hosted its annual spring scholarship banquet Monday evening at the Carl C. Morgan Convention Center, where the club awarded 15 one-year $2,500 scholarships to deserving graduating seniors who have chosen to continue their education at UA.

This year, the Bama Club was able to award a total of $37,500 from the 11 endowments setup for the scholarships.

Not only did the recipients receive their scholarships, but they were also given words of wisdom from two motivational alumni.

The first special guest of the evening was UA class of 2018 graduate Nivory Gordon III. He graduated with a degree in mechanical engineering and a minor in mathematics.

Gordon, who earned a Bama Club scholarship upon graduating from Selma High School and was awarded the Algernon Sydney Sullivan Award for the top student at the University of Alabama, encouraged the incoming students to take advantage of all the various experiences that UA will make available to them.

“Nivory was at the top of his class in everything he’s done at The University of Alabama, and he seems to feel that the Dallas/ Wilcox Bama club sent him on the right direction in just the small part that we were able to do,” Leet said. “We love having success stories like that.”

He offered 20 tips that he crowd-sourced from his classmates to provide a glimpse into the multitude of opportunities that await them on campus.

The evening’s primary speaker was Dr. Charles “Chuck” Karr, who is the dean of the College of Engineering at UA.

The Bama Club has had speakers return before, but this was the first time they’ve had someone come back in consecutive years.

Dr. Karr’s engaging charisma and words of advice to the incoming students made him a solid choice to bring back.

“It’s a pleasure for me anytime I have the opportunity to come celebrate the success of young people, and they do a great job here in the Dallas-Wilcox group of supporting young people,” Dr. Karr said.

He congratulated the scholarship recipients, but warned them not to be complacent.

He left them with two keys to being successful at UA, which were to stick to their moral values and work hard.

He told them not to forget what they’ve learned from the lessons their parents have instilled in them. He challenged them to put in at least 40 hours a week to their studies. He reminded them that even though they’re moving on to a bigger pond, they can still be the same hard-working student.

“They have to understand that when they get out into the larger world that they have to have a good work ethic and a strong moral compass,” he said. “I think it’s really important that young people recognize that.”

As he concluded, Dr. Karr spoke about the importance of giving back to the university. In a moment of spontaneity, he pledged to Leet that he’d donate $250 to the Bama Club.

“It’s easy enough for people to talk about what they think is important,” Dr. Karr said. “But sometimes, it’s harder to walk the walk. Anytime I can contribute to young people’s future success, I think it is important. My wife and I have a couple of endowed scholarships of our own, and I know what a difference it can make for young people.”

The room filled with Bama Club members, award winners and their families gave Dr. Karr a standing ovation as he returned to his seat. Leet then presented him with a basket of local goods as a gift, which included the barbeque sauce that Dr. Karr praised earlier in the evening.

The Bama Club continues to add to its list of scholarship award winners year after year. The club has awarded $189,000 to 110 students over the past decade.

“We really don’t make money on an event like tonight,” Leet said. “The point of the whole event is to energize Bama fans and alumni in Dallas and Wilcox Counties. This event tonight, with the turnout, certainly does that. It was probably one of our largest crowds ever.”