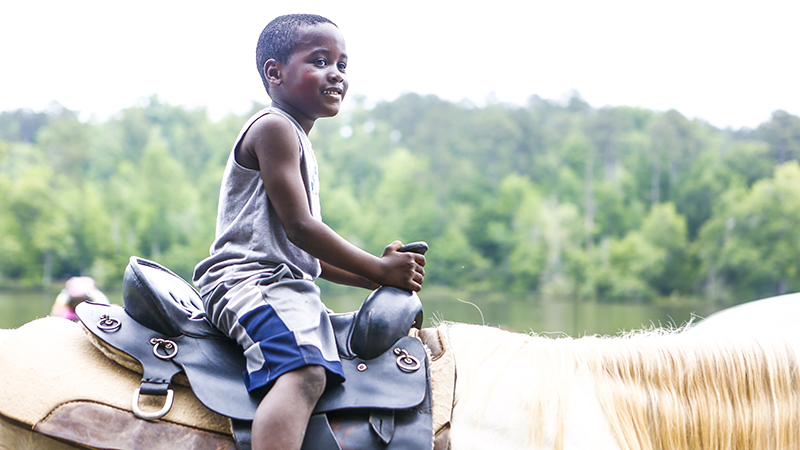 The grounds of Paul M. Grist State Park were filled with people Saturday for the second annual Trade Day.

Anita Ellison, president of Friends of Paul M. Grist State Park, a group of volunteers dedicated to helping the park thrive, said they could not have asked for a better day.

“We’ve had a really good day,” Ellison said as the event wound down. “What always gets me is the kids’ faces, those big smiles that you can’t manufacture other than with pure fun.”

With more than 50 vendors on hand selling arts and crafts, jewelry, clothing, food and more, there was a little bit of something for everyone to enjoy. There were also old-fashioned games and pony rides for children.

As Kadenze Shelton enjoyed a ride on one of the ponies, his mother Candy looked on waiving and smiling.

“It makes me happy. Those smiles make me smile,” Candy said. “Kadenze had ridden the pony, he’s been fishing. We’ve got a table full of gifts and prizes he’s won.”

Candy said it’s been a while since she has been to the park, but she’s glad she decided to go to Trade Day Saturday.

“I have enjoyed every single moment down here. It’s relaxing being close to the water. Kids have played, vendors are very reasonable and offer a lot of different items. The live band is nice,” Candy said.

“The whole day has been nothing but enjoyment, peacefulness and quietness. It’s just been a nice, relaxing day.”

Seeing families like the Sheltons enjoy the park is the reason why Friends of Paul M. Grist State Park puts on events like Trade Day.

“That’s what it’s all about. That’s what keeps us functioning –– all the support of the community,” Ellison said.

In 2015, the state made the decision to close the park after cuts were made to the Alabama State Parks Division by the Alabama Legislature to the tone of $3 million. Grist, along with four other parks, were shuttered. Two months after Grist closed, Dallas County leased the park from the state.

The proceeds from events put on by the Friends of Paul M. Grist State Park go directly back into the park and help put on other events.

“There’s not many places in this area in central Alabama and Dallas County where people can come and enjoy something like this, and that’s why it was so important to us to help keep it open,” Ellison said.

“Things like this I feel like are a dying art so to speak. There’s not places where the kids can go out and the family can go and spend time together. That’s what it’s all about for us.”

Now that Trade Day has come and gone, Ellison said the group will begin planning for the fall festival. They also hold benefit horse rides on the park’s 21 miles of trails. For more information about the Friends of Paul M. Grist State Park, visit them on Facebook.