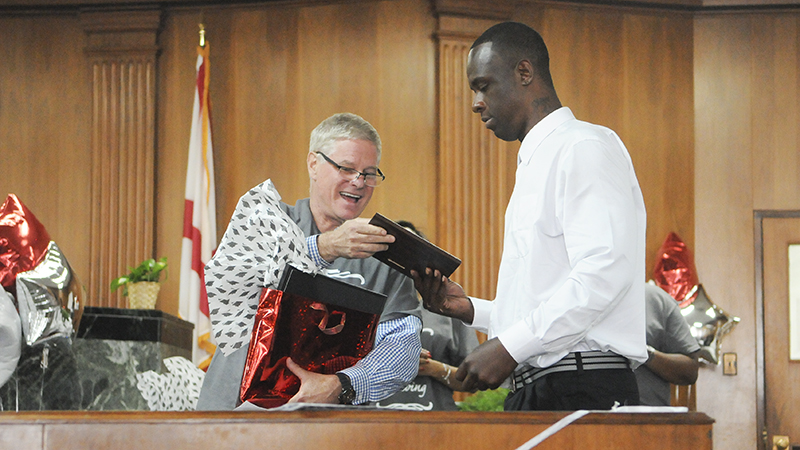 District Judge Robert Armstrong awards Galvin Bennett with a plaque Friday at the Dallas County Courthouse for graduating drug court. The program is offered by Dallas County Court Services to help people struggling with addictions to alcohol and drugs get a second chance at living a sober life. (Blake Deshazo | Times-Journal)

The sound of applause roared through the Dallas County Courthouse Friday morning as 13 drug court graduates got a new chance at life.

The program is offered by Dallas County Court Services to help people overcome addictions to drugs and alcohol and turn their lives around.

“It’s exciting because it’s a second opportunity,” said Miah Jackson, executive director for Dallas County Court Services. “It’s another opportunity for them to be light in our community and to have an impact for good. And that’s what we need.”

Angela Blackwell was the keynote speaker. In hope of inspiring the 13 graduates, she shared her story of going through pharmacy school and getting addicted to pills. She graduated, but she eventually lost her license and was arrested for 13 felonies. In 2010, she got her license back and went back to being a pharmacist. She now travels sharing her story to inspire others to get on the right path.

District Judge Robert Armstrong called each graduate up and presented them with a certificate for completing the program. He spoke a few words about each of them and let them share a few words with the family, friends and community members cheering them on.

“I can’t tell y’all how proud I am of each one of y’all. I know you’re proud of yourself, and you should be, but we are so proud of you,” Armstrong said. “This isn’t an easy program. Y’all know. I don’t spare any fur. … You guys have just killed this program and done such a great job. I’ve seen transformation in each one of you.”

The program lasts anywhere from six months up to two years depending on the individual. The Dallas County program has been around since 2009 and has been recognized nationally for its success.

Armstrong said each of the graduates look much different than the day they walked into the program or the first time he saw them in court.

“It’s my honor and privilege to be able to present each one of y’all with your certificate for graduation and your plaque and a little something-something we got for y’all.”

As each graduate walked up, they were greeted with a round of applause from the crowd and a hug from Armstrong.

“I’m just enthusiastic about the community, the leaders, the business owners, the attorneys and everyone who came out to support [the program],” Jackson said.

“It takes a community to ensure that this type of program and these individuals have what they need to sustain the progress they’ve made.”

Jackson said she hopes to see the graduates continue to stay sober and on the right path.