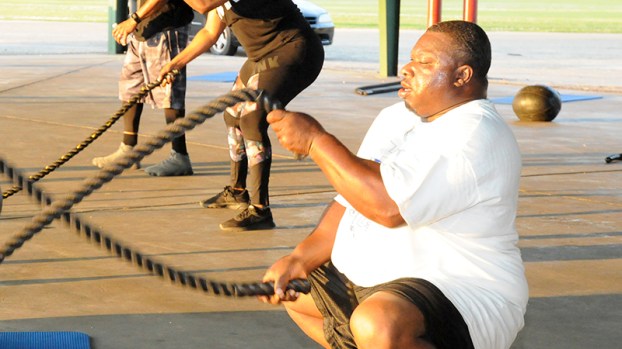 War cries and loud whistles rang throughout Bloch Park Tuesday as community members gathered to sweat it out with instructors Darrell Pratt and Travis Calhoun.

Pratt, a barber for 22 years, said working out is one of his passions, and the workout sessions started simply by him doing what he loves.

“One day I was running in the park and I thought about it,” he said. “Why not have a workout session going on outside because we don’t have that in Selma.”

Pratt said he wanted to do something different for the community.

While working out under the gazebo at Bloch Park Pratt spotted Travis Calhoun, his workout partner and fellow workout instructor, running on the tracks and asked him to join him for a workout.

“We were just working out together and we had another person come over and ask if [she] could work out with us,” he said. “People just started coming off the tracks and that’s how we built our classes.”

Working out outside not only cuts workout cost, but it makes it more accessible.

“Everybody doesn’t have the money to go to the gym,” Pratt said. “Why not bring the gym to the park.”

The one- hour classes are Monday- Thursday.

The classes started out free to the public but the instructors have recently started charging $5 per hour.

“I take that money and invest it in more equipment,” Pratt said.

The equipment is shared amongst the group, and at the end of each workout, the group collectively picks up the equipment and stacks it neatly to be loaded onto Pratt’s truck.

“I think it helps people learn how to work together,” he said.

There is a variety of workouts performed, and those different workouts benefit different muscles in the body.

“It helps relieves stress, and health wise it helps high blood pressure, the heart and helps [to keep you] from taking medicine.”

The classes are now on their third year, and Pratt said working out in this setting has even more benefits aside from losing weight and being healthy.

“I think they hear the fun,” he said. “I think they see us having fun and that’s what draws them to [the workout].”

Calhoun said the classes started out with just a few people.

Since those humble beginnings, the group has been growing more and more each year. Both instructors say the fun yet intense workouts are to blame.

Calhoun said even though the group loves the workouts sometimes other people allow the fear of being judged by others or allowing others to see them struggle through a workout stops them from joining in.

“They know we’re intense, but at the same time it’s all about the work,” he said. “We work with everybody.”

Calhoun encourages anyone who is afraid to workout to just come and give it a try, because once they see the results from their work it is all worth it in the end.