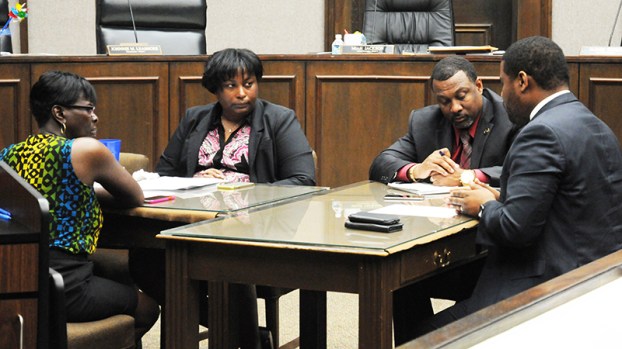 Members of the Selma city government met inside City Hall Thursday to discuss key issues regarding the depleted state of the city’s trash trucks. An issue dating back to previous administrations, public officials wanted to figure out a way to resolve it for good.

The group met for over an hour and a half to go over ways to fix the problem.

The city normally has multiple trash trucks running in order to provide the public service to the residents.

However, the wear and tear on the trucks has been costing the city thousands of dollars in maintenance fees, and city officials understood this is not a sustainable model.

For Johnson, he did not want to leave the meeting without a plan in place going forward.

“We have to figure something out. We are spending too much money on repairs,” Johnson said. “We cannot keep running how we are running. Ward Eight is a hot mess. They are looking to the council for help.”

In order to fix the problem of the trucks constantly breaking down, the group has been prospecting the idea of receiving a loan from the United States Department of Agriculture to lease as many as five trash trucks. According to Melton, the lease would cover a three-year period costing $160,000 per year.

Operating on a deficit budget, however, the officials knew they needed to come up with a way to raise revenue. The current budget for the city government is $16.9 million.

Ideas conjured up by the brain trust included the introduction of a half-cent sales tax, brought to attention by Johnson. Melton suggested the possibility of eliminating one-time bonuses for government employees as well as getting rid of council members’ discretionary funds.

Either of these ways, according to Melton, would help cover a sizeable amount of the cost to lease the trucks. He also threw out the possibility of creating a reserve account.

However, nothing is set in stone yet, as the group tries to find the best possible option. While they figure out a plan to raise revenue or make room in the budget, Melton believes the time to take action has taken long enough. He also gave his view of the one-time bonuses and discretionary funds.

“It is not fair to the public to hand out $200 thousand in bonuses but not have $160 thousand for trash trucks. I am going to keep singing this song: why do we have money for bonuses but not for the trucks?” Melton said to the group.

“It is frustrating that we have these problems and have to talk about trash every day. We have an opportunity to make it better. If we choose not to do anything, we are telling the public we care about raising finances but not about picking the city up.”

Many of his frustrations stem from his understanding of all the other issues the city government needs to focus on, such as combating crime and improving downtown.

With the new trucks, according to officials in the meeting, the maintenance costs would in turn go down as well.  Currently, the city has a maintenance person who comes down every four months to take a look at the trucks.

However, with it taking exponentially longer for one trash truck to pick up a whole city, the need for reliable maintenance is an urgent concern for the officials.

For Wade, she reiterated to the group the importance of not entering “panic mode.” Wade and Melton agreed to meet as soon as possible to break down the numbers even further. With multiple options available to provide the public this service, it was up for the officials at the meeting to discover the best route. While they may not have agreed on everything, they were all in agreement that they needed to work together for their common love of the residents.

“I just want to know where we are and how we can get these new trucks,” Thomas said. “I want a new beginning.”

Despite their urgency, all of the public servants wanted to make sure they correctly implement whatever method they choose.

For example, if they choose to take away one-time bonuses, Johnson wants to be sure the recipients of the money are made aware as far out as a year in advance.

The city council, mayor’s office and treasurer collectively left wanting to finish Selma’s trash problem once and for all.

For Melton, he wants his peers to take responsibility for their roles, and to keep him in check as well.

“My job is to execute. I want you all to hold me accountable,” Melton said. “But, I need the resources in order to be held accountable.”

By Oniska Blevins | The Selma Times-Journal Working with and mentoring the youth is near to Ashlyn Goodwin’s heart. As... read more